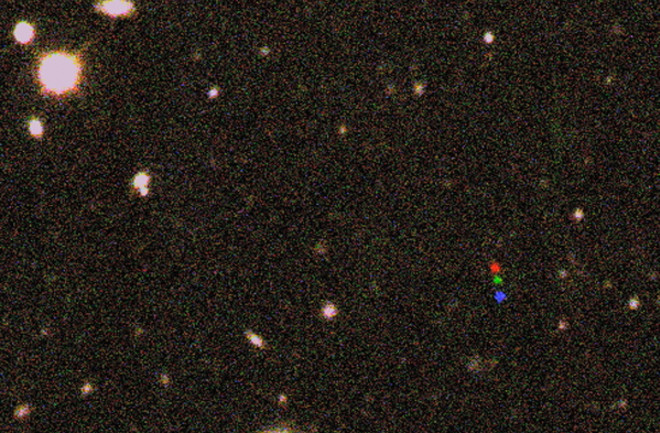 The discovery images of 2012 VP113. The dwarf planet moved between each image as seen by the red, green and blue dots. Credit: Scott S. Sheppard/Carnegie Institution for Science Even after all these years, the solar system can still surprise us. Not just with the occasional new rock — a nifty asteroid, or interesting comet — but sometimes we even find new minor planets and, if really lucky, an entire new region. Now astronomers have done just that: findings announced today suggest there's a never-before-seen minor planet orbiting the sun beyond Pluto. And, beyond that, it's possible a major planet is hiding out in the darkest, farthest regions of the solar system too. If the researchers are right, their discovery would redefine the edges of our planetary neighborhood.

We have a solid grasp of the innermost parts of the solar system: the rocky planets and asteroids closest in, from 0.39 to 4.2 astronomical units (or AU, equivalent to the average Earth-sun distance of about 93 million miles); gas giants from 5 to 30 AU; and Kuiper belt objects (like Pluto and Eris) between 30 and 50 AU. Far beyond that, we expect to find the Oort cloud, a roughly spherical distribution of cold, dark icy bodies too far away to make out clearly. Astronomers knew of only one object that orbited more than 50 AU away, as defined by its perihelion, the closest it gets to the sun: Sedna. Discovered about 10 years ago and about 1,000 km (600 miles) wide, it’s almost certainly a minor planet like Pluto, but its enormous distance (with a perihelion of about 76 AU) makes it hard to know for certain. Since then, we thought Sedna was one of a kind, the only known object that occupied the space beyond 50 AU, the well-defined edge of the observable solar system. Until now.

Orbit diagram with the sun and terrestrial planets at the center. The Kuiper Belt (including Pluto) is shown by the dotted light blue region just beyond the giant planets. Sedna's orbit is shown in orange while 2012 VP113's orbit is shown in red. Credit: Scott S. Sheppard: Carnegie Institution for Science Astronomers today announced inNature the discovery of a new Sedna-like body, named 2012 VP113, with a perihelion of 80 AU. It’s estimated to be 450 km (300 miles) wide, and also likely to be a dwarf planet. And while the mere fact that we can look at something so tiny and so far away is cool, the important thing is it proves Sedna is not alone. Instead of being some weird unique outlier, the distant world is likely part of a whole new category of solar system objects belonging to the inner Oort cloud. Odds are scientists will keep finding more and more of this type of world out there (the study’s authors estimate about 900 such objects), which will help astronomers understand more about the solar system’s dynamics. Perhaps most intriguingly, and still fairly speculatively, the findings also suggest the presence of another large planet in the outer reaches of the solar system. When the authors plotted the motion of Sedna, 2012 VP113, and distant Kuiper belt objects, they noticed some odd behaviors which they couldn’t explain — but which a massive, “super-Earth” planet about 250 AU away could. They note that such a dimly lit planet “would be fainter than current all-sky survey detection limits, as would larger and more distant perturbers” (i.e., planets), so it’s certainly possible… but right now it’s little more than a guess. A weird, intriguing guess.