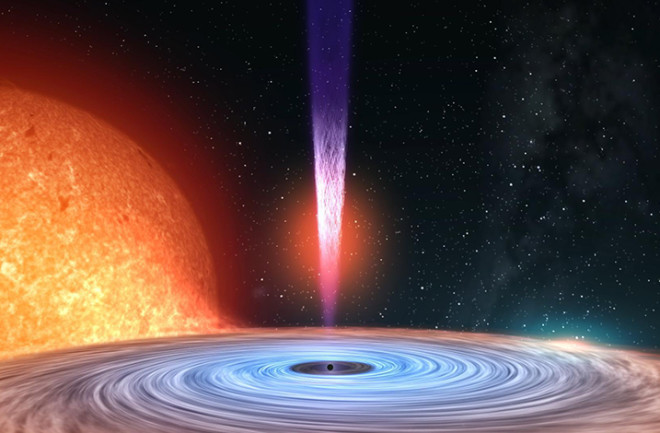 An artist's conception of a black hole emitting a relativistic jet. (Credit: G. Pérez Díaz (IAC)) The mysteries surrounding black holes make for some fascinating research. Whether consuming dead stars or anchoring baby galaxies, black holes are one of the most perplexing astronomical phenomena. Especially when they shoot out jets of supercharged plasma akin to Star Wars’ world-destroying Death Star superlaser. These streams of plasma are known as relativistic jets, and they form when a ravenous black hole siphons off and consumes matter from the star. Some of the stellar material gets ejected as powerful beams of ionized plasma along the black holes’ axis of rotation. They aren’t exclusive to black holes — neutron stars and pulsars can also create the jets of ionized energy. Supermassive black holes, though, make the strongest jets, but the method of the energy beams’ formation is still unclear.

In new research published in Nature Astronomy, an international team of scientists got a better handle on this phenomenon by observing two binary systems in the Milky Way consisting of a black hole and a star: V404 Cygni and GX 339-4. Using NASA’s NuSTAR space telescope and the William Herschel Observatory’s ULTRACAM, scientists have gotten new data on the formation and behavior of the jets. They noticed about a tenth of a second delay between when the jets form and when they begin to shine — a small interval of time, but enough that the plasma has already traveled some 19,000 miles. The best theory scientists have for this involves the immense magnetic forces created by the black hole. As the fields propel the material to near-light speed, the particles collide and energize the plasma until it begins to glow brightly and produce the electromagnetic radiation caught by ULTRACAM. What’s more, the delay seems to be related to the size of the black hole. One supermassive black hole sees lags between the acceleration and the “glow” millions of times greater than what was seen here. This could give astronomers a “yardstick of sort to measure black holes by. The destructive power of these jets could be enough to destroy an Earth-sized planet, if properly focused. Though that sounds like the Death Star (no kyber crystals required, either), the jets may also have the ability to create new stars and planets. As National Geographic notes, when a black hole blasts these energy streams into another nearby galaxy, the amount of matter and energy pouring in could generate new celestial bodies. The relativistic jets giveth, and the relativistic jets taketh away.