The dust clouds around supermassive black holes are the perfect breeding ground for an exotic new type of planet. 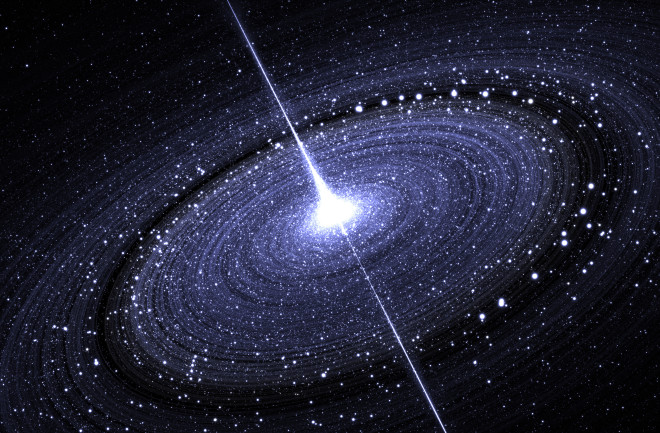 Supermassive black holes are among the most exciting and puzzling objects in the universe. These are the giant, massive bodies that sit at the heart of most, perhaps all, galaxies. Indeed, they may be the seeds from which all galaxies grow.

Supermassive black holes are at least a hundred thousand times the mass of our sun. They are often surrounded by thick clouds of gas that radiate vast amounts of energy. When this happens, they are called active galactic nuclei. Discovering the properties of these clouds, and their curious central residents, is an ongoing exercise for astrophysicists.

Now researchers have a new phenomenon to consider — the idea that planets can form in the massive clouds of dust and gas around supermassive black holes. Last year, Keichi Wada at Kagoshima University in Japan, and a couple of colleagues showed that under certain conditions planets ought to form in these clouds. These black hole planets, or blanets as the team call them, would be quite unlike any conventional planet and raise the possibility of an entirely new class of objects for astronomers to dream about.

The generally agreed theory of planet formation is that it occurs in the protoplanetary disk of gas and dust around young stars. When dust particles collide, they stick together to form larger clumps that sweep up more dust as they orbit the star. Eventually, these clumps grow large enough to become planets.

Wada and co say a similar process should occur around supermassive black holes. These are surrounded by huge clouds of dust and gas that bear some similarities to the protoplanetary disks around young stars. As the cloud orbits the black hole, dust particles should collide and stick together forming larger clumps that eventually become blanets.

The scale of this process is vast compared to conventional planet formation. Supermassive black holes are huge, at least a hundred thousand times the mass of our sun. But ice particles can only form where it is cool enough for volatile compounds to condense.

This turns out to be around 100 trillion kilometers from the black hole itself, in an orbit that takes about a million years to complete. Birthdays on blanets would be few and far between!

Next the team considered how large these bodies might grow. An important limitation is the relative velocity of the dust particles in the cloud. Slow moving particles can collide and stick together, but fast-moving ones would constantly break apart in high-speed collisions. Wada and co calculated that this critical velocity must be less than about 80 meters per second.

At the same time, the rate of collisions must be high enough for blanets to form during the lifetime of an active galactic nuclei, thought to be perhaps a hundred million years. That leaves just a small parameter of space in which blanets can form, unless there is another factor that promotes blanet formation.

The focus of the team’s current work is on just such a factor: the impact of radiation on the dust cloud. The radiation from an active galactic nucleus would tend to drive dust particles away from the black hole, creating a constant “wind” of fresh material for blanet formation.

That has a significant impact, say Wada and co. Under these conditions, blanets grow faster and can reach sizes up to 3,000 times the mass of Earth (beyond which they would be massive enough to form brown dwarfs). Without this dust wind, blanets would grow to no more than six times the mass of Earth. “Our results suggest that blanets could be formed around relatively low-luminosity active galactic nuclei during their lifetime,” say Wada and co.

Just what these bodies would be like is an open question. Wada and co say they cannot be gaseous giants like Jupiter or Neptune. “The gaseous envelope of a blanet should be negligibly small compared with the blanet mass,” they say. And neither would they be much like Earth. “Blanets are extraordinarily different from the standard Earth-type planets,” add the team.

For the moment, the work is entirely theoretical, and the prospect of observing a blanet does not seem high. The closest active galactic nucleus, Centaurus A, is 11 million light-years from Earth, well beyond the scope of current exoplanet searches, which stretch just a few thousand light years.

But if blanets do exist, the next question is whether they might support life. Exactly this question arose following the release of the movie Interstellar, which included a potentially habitable planet orbiting a black hole. The answer: probably not, although that is no reason for astronomers to stop looking. Happy blanet hunting!

Ref: arxiv.org/abs/2007.15198 : Formation of “Blanets” from Dust Grains around the Supermassive Black Holes in Galaxies