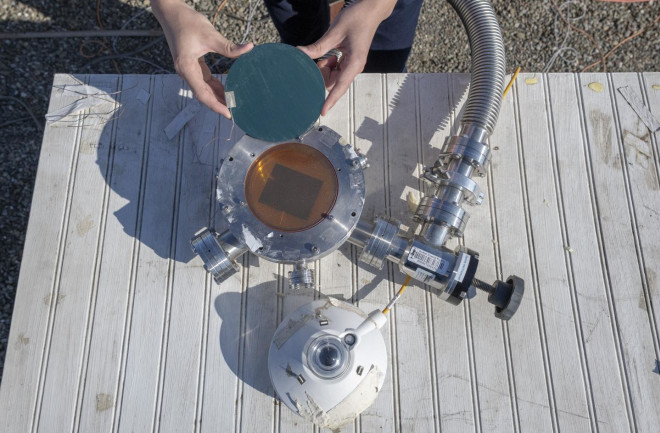 This new, developing device works to both heat and cool the area around it without fossil fuels. (Credit: Linda Cicero, Stanford News)

As people search for solutions to the climate change crisis on Earth, scientists are working to create renewable energy sources as alternatives to fossil fuels. Now, scientists at Stanford University hope to offer a new solution as they are developing a single device that collects solar energy and shoots radiation out into space – acting as both a heater and air conditioner.

Collecting the sun’s energy via solar power has been a leading alternative energy source for many years. But this new work suggests that devices could both collect solar energy could and also use what is described as “space energy,” which isn’t really a source of energy, but rather a heat sink.

Objects emit heat as infrared radiation (a type of light we can’t see). This radiation is mostly reflected back to Earth by reflective particles in the atmosphere. But some of it can escape into space. But this new technology, known as “radiative cooling,” capitalizes on this process and uses infrared light to cool its surrounding area, essentially allowing for fossil fuel-free air conditioning.

The research team thinks that such cooling “space energy” could potentially improve the efficiency of solar cells. And they’ve now developed a device that combines radiative cooling and solar absorption tech. “On a rooftop, we imagine a photovoltaic cell can supply electricity while the radiative cooler can cool down the house on hot summer days,” study lead author Zhen Chen, who is a former postdoctoral research associate at Stanford University and current professor at the Southeast University of China, said in a statement.

The device is made up of a solar absorber on top of a radiative cooler, which is composed of layers of nitride, silicon and aluminum. These layers are then vacuum-sealed to prevent heat loss. The device takes in solar energy and reflects infrared radiation in the cooler back to outer space. The device is still in development, but the researchers behind it claim that it can warm the surrounding area up to 75 degrees Fahrenheit (24 degrees Celsius) and cool the surrounding area up to 84 degrees Fahrenheit (29 degrees Celsius). The team also asserts that, since the solar absorber blocks the radiative cooler, it improves its performance.

But, while the promise of cooling your home using reflected infrared radiation from outer space sounds intriguing, it’s far from ready. Chen said there is a lot of work left to do before this technology could be scaled up and capable of commercial use.

If it works, the tech could be significant. The International Energy Agency says that emissions from air conditioners will continue to increase dramatically in the years ahead. As our planet warms, more people will use air conditioners and contribute to increased fossil fuel use.

Their work is published in the journal Joule.