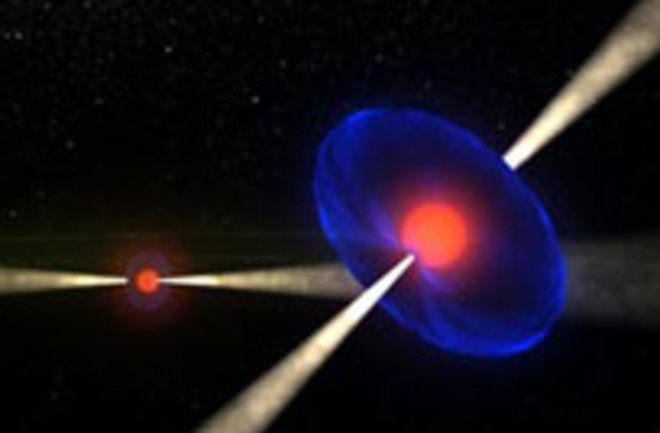 A new study of a pair of neutron stars has proven that Albert Einstein got the details right on his theory of general relativity, which describes the interactions of gravity, space, and time in our universe. A team of astrophysicists examined two newly discovered neutron stars, the small and dense stellar bodies formed after a supernova collapses, and found that Einstein accurately predicted their movements more than 90 years before the unusual star system was first sighted.

In Einstein's relativistic universe, matter curves space and slows down time, and the speed of light remains the only constant. But those are the big effects. The theory of relativity also includes some more esoteric details, one of which is called spin precession. The idea goes like this: Two massive bodies orbiting near each other will warp space enough to disturb the central axis around which both are moving, causing them to begin wobbling just like spinning tops. Strong gravity creates this so-called precession, and the more massive the objects, the easier the precession is to observe [ScienceNow Daily News].

For the study, published in the journal Science, researchers examined a rare star system comprised of a pair of pulsars orbiting each other. A pulsar is a type of neutron star that emits a strong beam of radio waves from each magnetic pole; the beams periodically sweep past Earth's telescopes showing a "pulse" of light like a lighthouse beacon.

Scientists know of more than 1,700 pulsars in our galaxy but of only one binary-pulsar system, discovered in 2003. It comprises two pulsars locked into close orbit around each other, so close they could fit within the Sun. Because of its strong gravitational field, this system is the best place to test Einstein's 93-year-old theory [AFP].

The international team of researchers tracked the pulses of one of the stars over the past four years, says Victoria Kaspi of McGill University. "Einstein predicted that, in such a field, the axis about which an object rotates will precess - or change direction slowly as the pulsar orbits around its companion. Imagine a spinning top tilted over slightly to one side - the spin axis wobbles" [Telegraph]. The result of their observations: The pulsar's