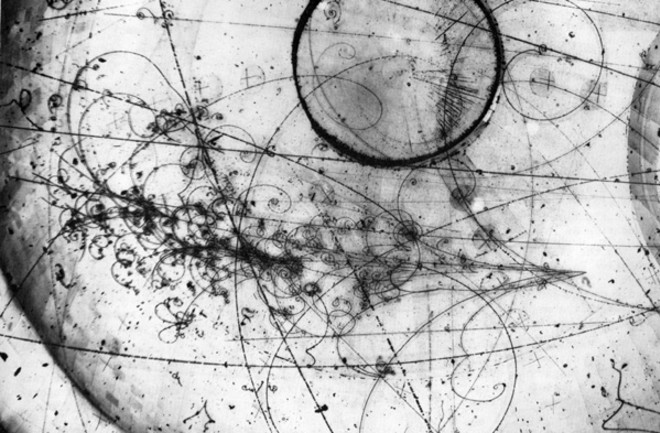 Neutrinos are often called “ghost particles,” and for good reason. Neutral in charge and tiny in mass, neutrinos are incredibly elusive and mostly pass unnoticed through ordinary matter, including you and me. In fact, neutrinos, one of physics’ fundamental particles, were once thought to be completely massless.

A recent observation from researchers in Italy, however, adds to mounting evidence however that neutrinos do have some – very tiny – mass. Specifically, it was found that neutrinos, which come in three varieties or “flavors,” can spontaneously change their flavor in a process known as oscillation. And because of the nature of quantum mechanics, oscillation only occurs if the flavors have unique masses.

To detect the oscillations, the OPERA collaboration fired a beam of muon neutrinos 450 miles through the Earth’s crust, from Switzerland to Italy. The long distance is needed to allow the muon neutrinos enough time to oscillate into a different flavor, but the flight takes less than 3 milliseconds, since the particles move at nearly light speed.

From 2008 to 2012, 10,000 muon neutrinos completed the long journey and were detected at Gran Sasso in Italy. Of those, five had transformed into a different flavor – the tau neutrino.

“It’s like throwing an apple, and having some turn into grapefruits and some turn into oranges by the time they’re caught,” neutrino physicist Alan Poon told WIRED.

The fifth sighting, announced last week, confirms that this is no fluke. The chance that five independent sightings could be caused by something other than neutrino oscillation is less than one in a million. In the statistical parlance of particle physicists, the observation has reached the 5 sigma level. Detection of the Higgs boson at the LHC required similar statistical confidence.

The evidence of flavor oscillation – and therefore neutrino mass – has been steadily building in recent decades. In 1998, the Japanese Super-Kamiokande detector announced the first confirmation of the phenomenon. But physicists’ guiding model of the universe, called the Standard Model, cannot explain why neutrinos have mass. That’s because they are so light and their spin is oriented in such a way that they don’t interact with the Higgs field, which gives all the other particles mass.

That disconnect doesn’t have scientists upset. Rather, it promises future refinements to the Standard Model.

“We need an extension of the Standard Model to explain the properties of the neutrino, which is clear now,” explains Giovanni De Lellis, spokesperson for the OPERA collaboration and professor of physics at the University of Naples. “The future program of OPERA is a combined study of electron, tau, and muon neutrinos to see what is going on.”

Although he’s awaiting an official publication to pass final judgment, Dr. Michael Smy, who works at the Super-Kamiokande detector, suspects that the result is solid. The key to these particle physics experiments is to ensure the detected events can’t be explained by other, less interesting processes.

Smy points out that OPERA’s “superb quality of the [particle] tracking… makes it harder for other interactions to fool you.”

Work on oscillations is far from done. Researchers are now interested in finding a possible difference between the oscillations of neutrinos and their antimatter equivalent, antineutrinos. Finding an asymmetry here could help explain why our universe is comprised of mostly matter, instead of anti-matter.

“Worldwide we are kind of in agreement that this is the most important thrust of [neutrino] research,” says Smy. Those are pretty massive implications for an astoundingly tiny particle.