There has been a spate of far-right insanity about carbon over the past week or so; it's like a handful of Congresscritters on that side of the aisle has taken crazy pills. Or more pills than usual. I already showed you Texas goofball Representative Joe Barton, who thought he had a Nobel Laureate on the ropes with his oh-so-probing questions about gas and oil that revealed Barton has a second grade understanding of science. 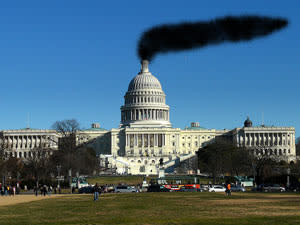 But now House Minority Leader (!) John Boehner reveals he can out-Barton Barton in an exchange with Geroge Stephanopoulos that, well, has to be read to be believed.

STEPHANOPOULOS: [...] What is the Republican plan to deal with carbon emissions, which every major scientific organization has said is contributing to climate change? BOEHNER: George, the idea that carbon dioxide is a carcinogen that is harmful to our environment is almost comical. Every time we exhale, we exhale carbon dioxide. Every cow in the world, you know, when they do what they do, you’ve got more carbon dioxide. And so I think it’s clear…

Um. CO2 a carcinogen? Who would say something as dumb as that? Oh -- he must've heard it from Barton. And Congressman? Methane is what comes out of cows. Not CO2, methane. Well, some CO2 comes from cows -- they breathe, after all-- but in context he obviously meant methane. You'd think with his severe case of rectal-cranial inversion Boehner'd know the difference. But of course, no one can hold a candle to the pile of crazy that is Michele Bachmann (R-aving lunatic) who sets the bar for "barking mad" so high that Charles Manson can only sit back in jealousy. Listen to this monologue by her about carbon dioxide, and bear in mind she has a college education. She would flunk a fourth grade science class saying that stuff. Thank heavens she's only in the friggin' United States Congress! It's hard to know where to start with this. Carbon dioxide is only 0.03% of the Earth's atmosphere, not 3%. It is most certainly not harmless, as too much of it will kill you. She's right that it's natural, but so is arsenic. It's also important to life, but too much will kill you just as certainly as too much water will -- you can't breathe either of them. I love how she stresses how natural CO2 is, like humans cannot make it at all. We know where carbon dioxide comes from in human industry, and we know it's not negligible, and we know it has an effect. What she spouts here is basically a stream of lies piled one atop the other. In the end of that video Representative Earl Blumenauer pretty much smacks her down, letting everyone know that she was indeed simply making stuff up. The world some of these politicians live in is as bizarre and twisted as anything I have ever seen in a cartoon. It's incredible to me that such know-nothings are actually able to control the laws and policies of this nation. Happily though, they do eventually come up for re-election. Maybe then we can breathe easy again.