Who Were the Neanderthals?

Our kissing cousins were close kin. 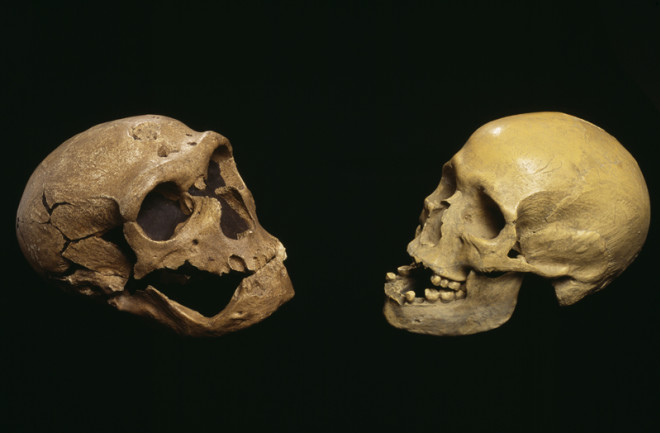 Despite differences such as a heavier brow and more oblong shape, Neanderthal skulls (left) housed brains similar to our own in volume. (Credit: Pascal Goetgheluck/Science Source)

In 1856, quarry workers inadvertently shoveled some bones out of a cave and 65 feet down the steep slopes of Neander Valley, Germany. Salvaged by the quarry owner, the fossils would spark the study of human evolution.

The bones were human, but not quite: The limbs were thick, the ribs unusually rounded and the partial skull had a protruding brow and oblong shape. Some early scholars argued it was a malformed individual, or even a Cossack soldier with rickets. But geologist William King named it Homo neanderthalensis, the first scientifically named fossil hominin, albeit one held in low regard. In 1864, in the Quarterly Journal of Science, King speculated the creature’s “thoughts and desires … never soared beyond those of the brute.”

Since then, researchers have recovered bones from about 350 Neanderthals, 40,000 to 200,000 years old, from much of Eurasia. New technologies have probed Neanderthal dental plaque and DNA, illuminating their diets, diseases and genetic code. “Neanderthal research is just on fire,” says Duke University anthropologist Steven E. Churchill.

Genetic studies have confirmed that Neanderthals were our kissing cousins, evolutionarily speaking. Homo sapiens and Neanderthals descended from the same group of ancestors, likely in Africa, over 520,000 years ago. Some members of this population migrated to Europe, where they evolved into Neanderthals, while those who remained in Africa gave rise to modern humans. During this period of geographic separation, the lineages were on their way to becoming different species, accumulating genetic differences over many generations, which would have eventually prevented interbreeding. But before that occurred, the groups repeatedly met again and mated during several periods as modern humans spread to Eurasia, beginning around 100,000 years ago.

Short and muscular, Neanderthals had bodies adapted to Ice Age Europe. Their craniums were as large as contemporaneous H. sapiens and — contrary to the brutish stereotype — Neanderthals made complex weapons, buried their dead and used a range of resources, from medicinal plants to feathers from birds of prey. They were “intelligent, well adapted and flexible,” says April Nowell, a prehistoric archaeologist at Canada's University of Victoria.

Yet Neanderthals may have been differently intelligent: proficient at utilitarian tasks, but deficient in social and aesthetic sensibilities. Because Neanderthals rarely made symbolic objects, like beads, some anthropologists argue they were incapable of symbolic thought or language. Others disagree, and note that Neanderthals had many possible adaptations for speech, including sharing a genetic variant with us that’s linked to language ability.

Knowing that Neanderthals and modern humans interbred, a minority of researchers now prefer sub-species classifications: Homo sapiens neanderthalensis and Homo sapiens sapiens. The names don’t change our evolutionary relations. While geographically separated, Neanderthals and modern humans evolved enough differences to be easily distinguished by DNA and physical traits, but not enough to make interbreeding impossible. They were in the process of becoming distinct species, but not quite there.

As for pronunciation, King named the first scientifically described specimen for where it was discovered: Neander Valley, or Neanderthal — thal being a spelling variation of the word for valley. When Germany standardized spelling in the early 20th century, thal became tal. While the formal scientific name remains Homo neanderthalensis, scholars diverge on the colloquial, writing Neandertal or Neanderthal. But regardless of spelling, both tal and thal have always been pronounced with a soft “t” in German, similar to the “t” at the end of “thought” rather than the “th” at the same word’s beginning.

Sex With Benefits, But Mostly Costs

In 2016, a genetic study of more than 50 Homo sapiens fossils 7,000 to 45,000 years old showed the proportion of Neanderthal DNA in our species diminished over time. This pattern suggests that most Neanderthal genes were harmful to modern humans and were weeded from our gene pool: Individuals with those Neanderthal genes were less likely to survive and reproduce. Some Neanderthal DNA persists today, comprising roughly 2 percent of the genomes of all non-Africans, but it’s generally confined to “junk” regions that do not contain vital genes.

However, Neanderthals do contribute a small number of our functioning genes. To understand their effect on living humans, researchers have analyzed tens of thousands of modern genomes to determine whether individuals with Neanderthal genes are more likely to have certain traits. The results show that many Eurasians have Neanderthal genes influencing hair, skin tone and immune function, which may have helped their African ancestors adapt to the colder, darker conditions of Europe. On the other hand, Neanderthal genes also increase risk for depression, obesity and autoimmune diseases. But before blaming your ailments on Neanderthals, remember these are complex traits, influenced by many genes and lifestyle factors.

The End of Neanderthals

The youngest conclusively dated Neanderthal fossils and artifacts clock in at around 40,000 years old. Researchers have put forth a range of possible explanations for their demise, including periods of extreme cold, a volcanic super-eruption or competition with a whole rogues’ gallery of carnivores, from scimitar cats to cave lions, that kept Neanderthal populations small. Other even less likely hypotheses include illnesses similar to mad cow disease, spread through cannibalism.

However, most scholars believe modern humans played a role. “Neanderthals go extinct right at the time modern humans get there,” says Churchill. “I don’t think it’s a coincidence.”

Although Neanderthals had survived previous encounters with modern humans migrating from Africa, the wave that arrived roughly 45,000 years ago was different: They came armed with stone projectile points that could be shot long distances. Neanderthals, like earlier H. sapiens, made thicker points, better for thrusting spears used at close range.

And Neanderthals may have already been on the brink. For at least 80,000 years before their end, Neanderthals had extremely low genetic diversity, suggesting they were a small population heading toward extinction. Add competition from projectile-wielding modern humans, plus harsh environmental conditions and threats like cave lions, and you have “just a whole bunch of factors coming together that over time lead to their demise,” says Nowell, “a perfect storm.”