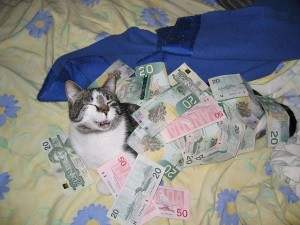 "Salience and satisfaction are important factors in determining the comparisons that people make. We hypothesized that people make salient comparisons first, and then make satisfying comparisons only if salient comparisons leave them unsatisfied. This hypothesis suggests an asymmetry between winning and losing. For winners, comparison with a salient alternative (i.e., losing) brings satisfaction. Therefore, winners should be sensitive only to the relative value of their outcomes. For losers, comparison with a salient alternative (i.e., winning) brings little satisfaction. Therefore, losers should be drawn to compare outcomes with additional standards, which should make them sensitive to both relative and absolute values of their outcomes. In Experiment 1, participants won one of two cash prizes on a scratch-off ticket. Winners were sensitive to the relative value of their prizes, whereas losers were sensitive to both the relative and the absolute values of their prizes. In Experiment 2, losers were sensitive to the absolute value of their prize only when they had sufficient cognitive resources to engage in effortful comparison."