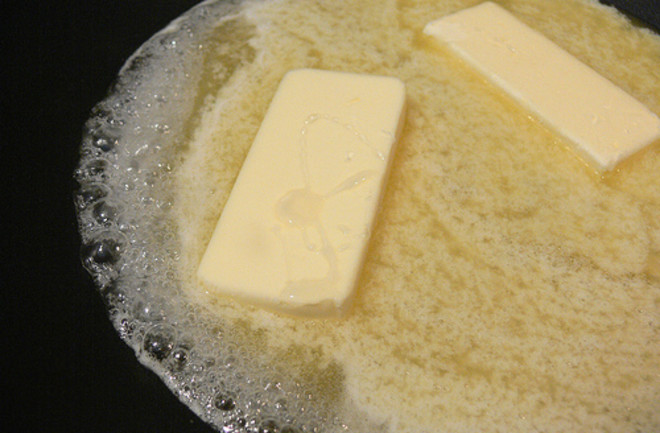 Photo: flickr/jessicafmWhat is the secret of butter? How do those rectangular prisms make everything better? Is it the fatty taste? The grassy notes? The oh-so-creamy texture? Does everyone like the same aspects of butter, or are different people responding to different characteristics? These scientists had a lot of people eat a lot of butter to try to determine what characteristics make people like or dislike a butter or butter-spread by using principal component analysis (PCA). Perhaps for the follow up study, they should just ask Paula Deen!Identification of the characteristics that drive consumer liking of butter. "This study identified and explored the sensory characteristics that drive consumer liking of butter. A trained descriptive panel evaluated 27 commercial butters using a defined sensory language. Two focus groups were conducted with butter consumers to gain an understanding of consumer use and consumption habits. Six representative butters and 2 vegetable oil spreads were selected for consumer acceptance testing. Both internal and external preference mapping techniques were applied to interpret consumer data. Key discriminating sensory characteristics of butters included color intensity; diacetyl, cooked, grassy, and milk fat flavors; and salty taste. From focus groups and quantitative consumer testing, the key butter features were a desirable flavor and a natural image. Negative aspects included price and cholesterol. Five consumer clusters with distinct butter and spread flavor likes and dislikes were identified. Butter is a desirable product to consumers. Sensory expectations of butter vary among consumers, and butters with specific sensory characteristics could be marketed to specific target market segments." Bonus quote from the full text: "The sensory language identified differentiated the butters and spreads (Table 3). Principal components plots of butters are shown in Figures 1 and 2. Principal component 1 (28% variability) was composed of waxy, fruity, and methyl ketone flavors, whereas PC2 (21% variability) differentiated the butters on grassy and mothball flavors and yellow color intensity. Principal component 3 (16% variability) differentiated the butters on cooked, milk fat, and salty taste (positively loaded) and stale flavor (negatively loaded). Principal component 4 (10% variability) was composed of cultured butter flavors (diacetyl flavor and sour taste). Two terms, painty and prickle, were identified in the butters used for language generation but were not identified in the samples used in this study."

Discoblog: NCBI ROFL: Sword swallowing and its side effects.