NCBI ROFL: Who ever said scientists were polically correct?

"Down's syndrome is characterized not only by a typical "habitus", mental retardation of variable gravity and several alterations of the cardiovascular, respiratory, gastrenteric and immunitary system, but also by specific attitudes and characteristics that are in common with the Oriental population. Starting from the origin of the term mongolism, replaced with other terms such as Trisomy 21, Down's syndrome, and anomaly of Down because of the racist use made in the last century, we propose, in the light of modern knowledge about the heredity of features, a reflection on those aspects and attitudes which highlight a very particular twinning between a Down person and Asiatic peoples." 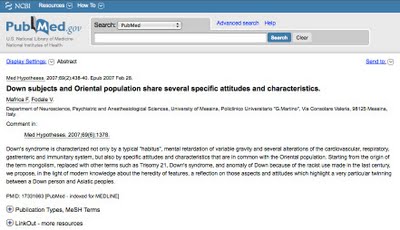 Thanks to Philip for today's ROFL!