NCBI ROFL: Where has all the road kill gone? 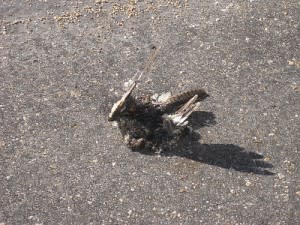 Have you noticed that there's less road kill out there nowadays? No? Me neither, but these scientists have, and they used their 30 years of data on swallow populations (including those found squished on roads) to try to figure out why. You might think that there are simply fewer swallows out there, but you would be wrong. In fact, a smaller percentage of them are getting hit by cars. Turns out that birds with longer wings are more likely to get run over, possibly because they "have lower wing loading and do not allow as vertical a take-off as shorter, more rounded wings." As those longer-winged birds were being selected against by cars, the population as a whole evolved shorter wings and hence have become less likely to end up as road kill. Evolution in action! "An estimated 80 million birds are killed by colliding with vehicles on U. S. roads each year, and millions more die annually in Europe and elsewhere. Losses to vehicles are a serious problem for which various changes in roadway design and maintenance have been proposed. Yet, given the magnitude of the mortality reported for some species, we might expect natural selection to favor individuals that either learn to avoid cars or that have other traits making them less likely to collide with vehicles. If so, the frequency of road kill should decline over time. No information is available for any species on whether the extent of road-associated mortality has changed. During a 30-year study on social behavior and coloniality of cliff swallows (Petrochelidon pyrrhonota) in southwestern Nebraska, we found that the frequency of road-killed swallows declined sharply over the 30 years following the birds’ occupancy of roadside nesting sites and that birds killed on roads had longer wings than the population at large."

Discoblog: NCBI ROFL: You put the deer tongue where?!?