"Recent studies of socially monogamous species have shown that in many cases females do not copulate exclusively with their pair mates, but are also receptive to other males. The explanation usually given for unfaithful female behavior is that most females are unable to bond with a male they would prefer as genetic father to their offspring. To secure male assistance the female therefore pairs with an available male but also copulates with males of supposedly higher genetic quality. Here we offer an alternative evolutionary explanation for female infidelity, which does not rely upon this 'Good Genes hypothesis of female choice. We show with a simple model that in an evolutionary game between three players, a male, a female and a male lover, solutions exist in which the female can secure more assistance from her mate by being receptive to other males. We conclude that female sexuality can have a decisive role in regulating social behaviour, in which the fertile female is the driving force." 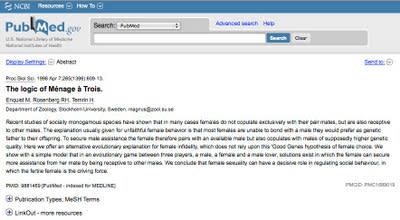