NCBI ROFL: The effect of hurricanes on popular baby names.

"How do psychological processes shape how culture evolves? We investigated how a cultural item's popularity is shaped by the recent popularity of other items with features in common. Specifically, using more than 100 years of first-names data, we examined how a name's popularity is influenced by the popularity of that name's component phonemes in other names in the previous year. Building on mere-exposure research, we found that names are more likely to become popular when similar names have been popular recently. These effects are nonlinear, however, and overpopularity hurts adoption. In addition, these effects vary with phoneme position. We demonstrate the causal impact of similarity on cultural success in a natural experiment using hurricane names. An exogenous shock to a phoneme's frequency, due to the presence of the phoneme in the names of prominent hurricanes, boosts the popularity of names that share that phoneme. Taken together, our results suggest how the similarity between cultural items affects how popular they become and how culture evolves more broadly." Bonus quote and figure from the full text: "The more attention a hurricane name received (i.e., the more damage that hurricane caused), the more popular baby names with the same phonemes became (Fig. 5). Following Hurricane Katrina, for example, names that begin with K saw an approximately 9% increase in usage. The effect was nonlinear, however, and after a certain point, additional increases in damages no longer increased the popularity of phoneme-sharing names. This suggests a potential trade-off between a positive boost from phonetic familiarity and either overpopularity or the negative connotations associated with an extremely damaging hurricane." 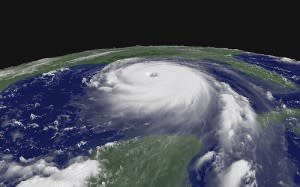 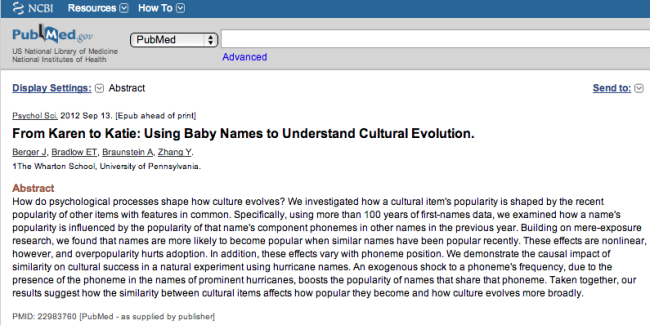 Discoblog: NCBI ROFL: What’s in a name? Part III: Why Dennis is a dentist.