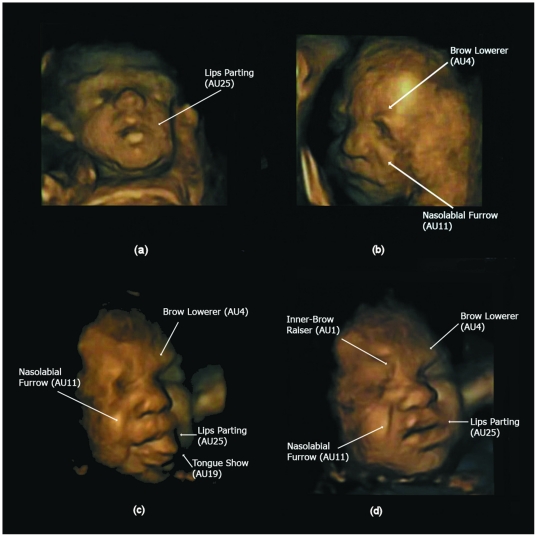 Do facial expressions develop before birth? "BACKGROUND: Fetal facial development is essential not only for postnatal bonding between parents and child, but also theoretically for the study of the origins of affect. However, how such movements become coordinated is poorly understood. 4-D ultrasound visualisation allows an objective coding of fetal facial movements. METHODOLOGY/FINDINGS: Based on research using facial muscle movements to code recognisable facial expressions in adults and adapted for infants, we defined two distinct fetal facial movements, namely "cry-face-gestalt" and "laughter- gestalt," both made up of up to 7 distinct facial movements. In this conceptual study, two healthy fetuses were then scanned at different gestational ages in the second and third trimester. We observed that the number and complexity of simultaneous movements increased with gestational age. Thus, between 24 and 35 weeks the mean number of co-occurrences of 3 or more facial movements increased from 7% to 69%. Recognisable facial expressions were also observed to develop. Between 24 and 35 weeks the number of co-occurrences of 3 or more movements making up a "cry-face gestalt" facial movement increased from 0% to 42%. Similarly the number of co-occurrences of 3 or more facial movements combining to a "laughter-face gestalt" increased from 0% to 35%. These changes over age were all highly significant. SIGNIFICANCE:This research provides the first evidence of developmental progression from individual unrelated facial movements toward fetal facial gestalts. We propose that there is considerable potential of this method for assessing fetal development: Subsequent discrimination of normal and abnormal fetal facial development might identify health problems in utero." 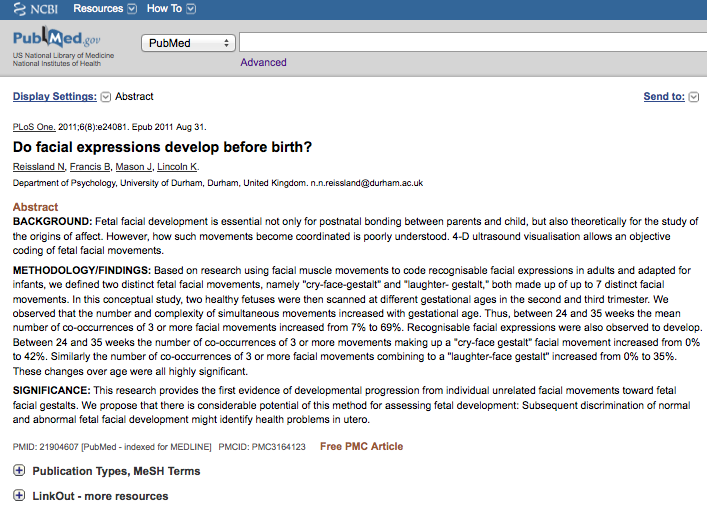 Discoblog: NCBI ROFL: A novel use for babies!