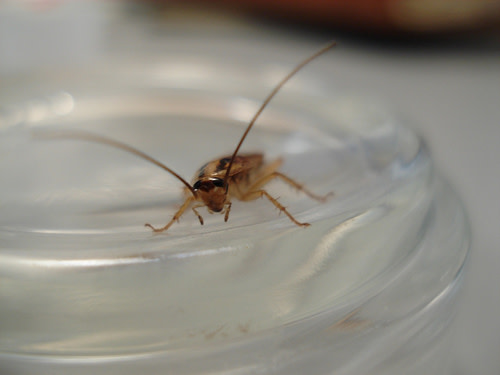 It's insect week on NCBI ROFL! All week long we'll be featuring the funniest scientific papers about our favorite creepy crawlies. Enjoy! "Cockroaches were observed with videographic methods as escape running was initiated, but with obstacles in the path of their run. The goal was to determine the repertoire of possible responses to obstacles and the sensory cues used to trigger the responses. Intact cockroaches collided with obstacles on only about 10% of trials. The most common collision avoidance strategy was simply to stop running prior to impact. However, occasionally animals moved vertically and climbed over the barrier, or turned and navigated an edge of the obstacle, or completely reversed run direction. The avoidance strategies chosen depended on the size and configuration of the obstacle. Tests for the use of vision in detecting obstacles showed that its role, if any, is small. However, all manipulations that altered the antennal system changed behavior in a way consistent with the hypothesis that antennal mechanosensation plays a major role in collision avoidance. For example, reducing antennal length, or severing the main antennal nerve without altering the length produced significant increases in the frequency of collisions. Tests with tethered insects showed that (1) the antennae are preferentially directed forward as animals run, and (2) nearly simultaneous contact with both antennae is required to make the cockroach stop. Our data indicate that running cockroaches employ strategies that set their sensorimotor systems in a mode of readiness to deal with obstacles and they suggest that sensory information about the presence and configuration of obstacles is used to make choices, at very short latencies, about how to respond to obstructions." 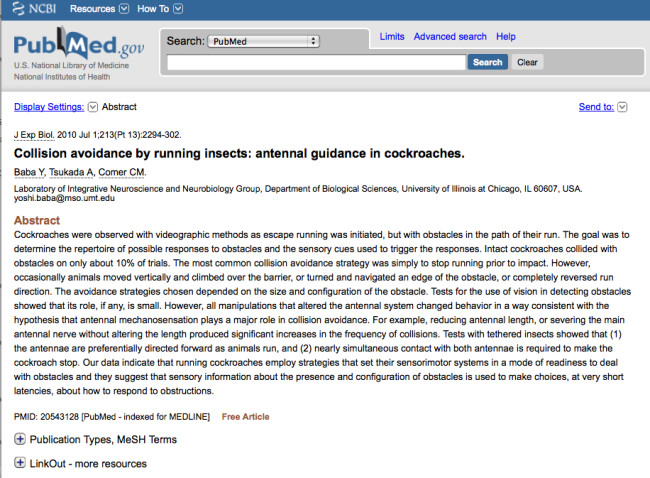 Discoblog: NCBI ROFL: Nothing like a thin coat of earwax to keep the bugs away.