NCBI ROFL: On the physics of slug mucus. 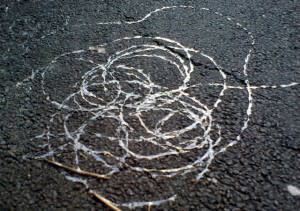 Nonlinear viscoelastic biomaterials: meaningful characterization and engineering inspiration. "Nonlinear mechanical properties play an important role in numerous biological functions, for instance the locomotion strategy used by terrestrial gastropods. We discuss the progress made toward bioinspired snail-like locomotion and the pursuit of an engineered fluid that imitates the nonlinear viscoelastic properties of native gastropod pedal mucus. The rheological behavior of native pedal mucus is characterized using an oscillatory deformation protocol known as large amplitude oscillatory shear, and we review recently developed techniques for appropriately describing nonlinear viscoelastic behavior. Although materials that exhibit purely elastic and purely viscous nonlinearities are amenable to standard techniques for characterization, pedal mucus samples (and biomaterials in general) are viscoelastic, exhibiting both elastic and viscous nonlinear responses simultaneously and requiring advanced techniques for characterization. We reveal the utility of these new methods by examining trail mucus from the terrestrial slug Limax maximus using oscillatory shear rheology. Material responses which previously could only be described mathematically, with little physical insight, can now be interpreted with familiar language such as strain-stiffening/softening and shear-thickening/thinning. The new methodology is applicable to any complex material that can be tested using imposed oscillatory deformations. We have developed data-analysis software to enable wider use of this framework within and beyond the biomaterials community. The functionality of this software is outlined here." 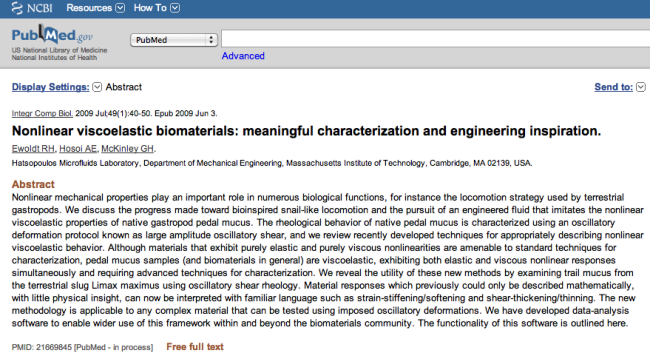 Discoblog: NCBI ROFL: A micro creeping robot for colonoscopy based on the earthworm.