NCBI ROFL: Lions at the zoo not roaring enough. What to do? 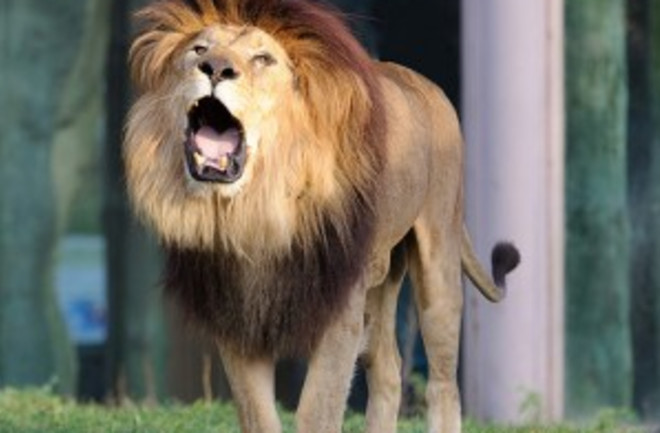 Visitors at zoos often complain that the animals just sit there. Nevermind that lions are nocturnal/crepuscular (awesome word!), people just want to get the most roar for their buck. Here, some zookeepers decided to address the problem by just playing taped lion roars to satisfy the visitors.  They also recorded the reactions of visitors and nearby animals. Surprisingly, it worked! Not only were the visitors happy, but it didn't stress out either the lions (OMG, another lion in my territory?)  or nearby ungulates (giraffes, zebras, waterbucks, and gazelles).

Lion, ungulate, and visitor reactions to playbacks of lion roars at Zoo Atlanta.

"Felids in captivity are often inactive and elusive in zoos, leading to a frustrating visitor experience. Eight roars were recorded from an adult male lion and played back over speakers as auditory enrichment to benefit the lions while simultaneously enhancing the zoo visitor experience. In addition, ungulates in an adjacent exhibit were observed to ensure that the novel location and increased frequency of roars did not lead to a stress or fear response. The male lion in this study roared more in the playback phase than in the baseline phases while not increasing any behaviors that would indicate compromised welfare. In addition, zoo visitors remained at the lion exhibit longer during playback. The nearby ungulates never exhibited any reactions stronger than orienting to playbacks, identical to their reactions to live roars. Therefore, naturalistic playbacks of lion roars are a potential form of auditory enrichment that leads to more instances of live lion roars and enhances the visitor experience without increasing the stress levels of nearby ungulates or the lion themselves, who might interpret the roar as that of an intruder."