NCBI ROFL: Jeez people, enough with the cockroaches in your colons already. 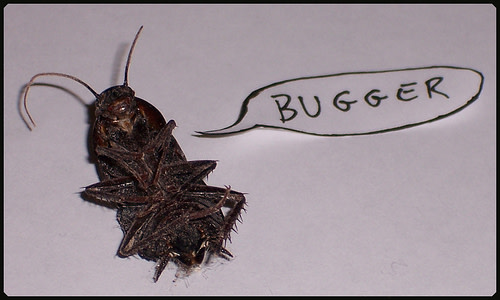 Caught on camera: an unusual type of bug in the gut. "During screening colonoscopy, a cockroach was encountered in the transverse colon of a 51-year-old woman with a history of schizophrenia. It was <1 cm in size and had a green, aqueous substance sticking to its legs. Despite extreme caution during extraction, the cockroach disintegrated and was removed by using suction. The patient denied any knowledge of accidental ingestion or history of pica. The most plausible explanation was inadvertent intake of the cockroach while the patient was consuming green gelatin shortly before the procedure.The patient was completely asymptomatic, and it was decided that no stool studies were warranted. The patient was discharged home with instructions to follow-up in the event of any GI symptoms. The endoscopic images from this case were shared with an entomologist, who identified the bug as the nymph stage of the German cockroach Blattella germanica." Bonus commentary from the journal: "Cockroaches are insects of the order Blattaria, the name cockroach deriving from the Spanish word cucaracha and the order name from the Greek and Latin word Blatta for insect. There are >4000 species of cockroach, of which only 30 are associated with human habitations and 4 of which are considered common pests. Pest species of cockroaches prefer warm conditions, but it is unlikely that the cockroach chose to enter this person's GI tract just for comfort. I am certain this cockroach was lonely before its demise, for these arthropods are communal creatures that have complex social behaviors such as resource allocation. Indeed, they leave chemical trails in their feces and emit pheromones for mating and grouping behaviors. Could this cockroach have been looking for food? Some male cockroaches have been shown to eat bird droppings from which they obtain nitrogen, which is then brought back to feed their young. The preparation taken for colonoscopy would have led to this cockroach's disappointment were that to have been the reason he or she entered this colon. Furthermore, the colon is a relatively anaerobic environment and, although cockroaches can go without air for 45 minutes, they do not have lungs. Like all insects, cockroaches breathe through a system of tubes called tracheae, which are distributed throughout their bodies like the branches of a tree and open when the concentration of CO2 rises. Cockroaches per se are not particularly dangerous to humans, although they have been implicated as vectors in the fecal-oral transmission of cysts of Entameba histolytica and Giardia lamblia. In Franz Kafka's famous novella The Metamorphosis, written in 1915, Gregor Samsa is transformed overnight into a giant cockroach-like insect. He is unable to go to work, and his circumstance has obvious and far-reaching effects on his family dynamics; ultimately Gregor is found dead in his room. I am sure that some readers view the presence of this cockroach in the colon to be just as repulsive as Gregor considered his “unhappy and hateful appearance.” But to quote Kafka, “The right understanding of any matter and a misunderstanding of the same matter do not wholly exclude each other.”" 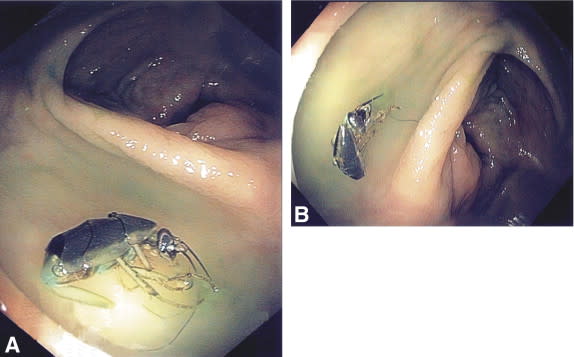 Editorial note: this is the second medical case we've featured with a colonoscopy revealing a cockroach in the gut. (The first can be found here.) Makes you wonder how many of us have a hidden roach right now...