NCBI ROFL: If you feel like you can't work due to a hangover, you're probably right. 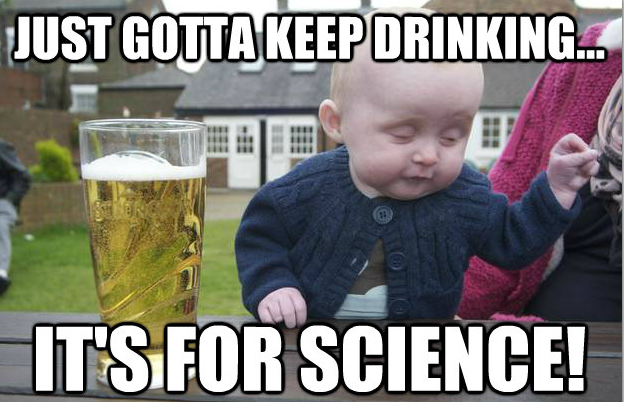 Your head throbs. You feel like you've been run over by a truck. Ugh. It's no fun to go to work with a hangover. You want to call in and take one of your personal days, but is it really worth it? Are you actually going to be bad at your job, or should you just suck it up and go to work? Well, these scientists got 13 volunteers to go home, get wasted, and come back the next day to see if they performed as terribly as they felt. The results weren't pretty.The effects of self-administered alcohol-induced 'hangover' in a naturalistic setting on psychomotor and cognitive performance and subjective state. "AIMS: To examine in as naturalistic a setting as possible whether having an alcohol-induced 'hangover' impairs psychomotor and cognitive performance. PARTICIPANTS AND DESIGN: The sample consisted of 71 male and female social drinkers who were tested twice, once at baseline and once after exposure to the study condition. They were randomized into a control group who returned for testing on a prearranged date (n = 33), and a group who were instructed to make arrangements to return the day after a self-determined heavy drinking session (n = 38). Of the 'hangover' group, 13 participants still had a blood alcohol concentration of >1 mg/100 ml at the time of testing and these were analysed separately. All participants were students. MEASUREMENTS: Psychomotor performance was assessed by means of a battery of psychomotor tasks, rate of information processing was tested by the Speed and Capacity of Language Processing Test (SCOLP) and subjective state was assessed by questionnaire measures. FINDINGS: All participants in the 'hangover' group reported subjective and physical symptoms of hangover on the second testing session. Performance was significantly impaired on the hits-key components of the vigilance task, was less accurate on the primary and secondary reaction time tasks and showed greater dispersion in range of ability for participants in the 'acute and hangover' compared to 'control'. Probe memory revealed no significant group effect. Ratings of subjective state revealed significant group differences for the variables 'ability to drive', 'concentrate' and 'react quickly' as well as 'tiredness'. There were no group differences for performance on the SCOLP. CONCLUSION: Hangover had negative effects on self-reported subjective and physical state and subtle effects on performance." 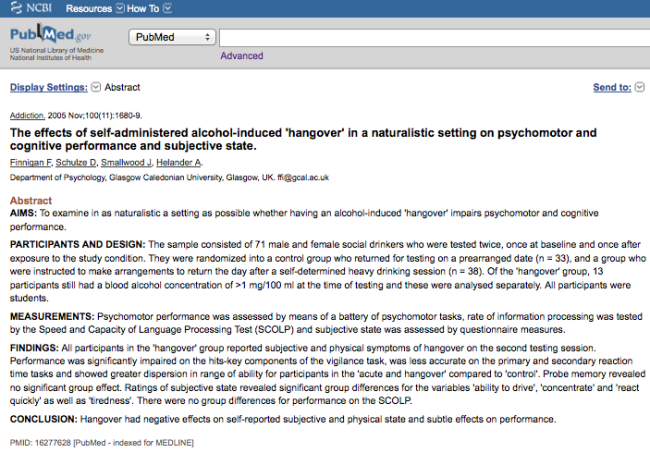