NCBI ROFL: How to keep your dirty laundry smelling like B.O. I have heard many heated arguments about the best way to store coffee (whole beans in the freezer, duh!), but nobody seems to care how long-term storage affects body odor samples. Does refreezing ruin them like it does ice cream? If I freeze my boyfriend's sweaty shirt for six months, will I find it less "pleasant" or "attractive"? Well, I'm happy to say this study finally answers these questions, and then some.Methods of human body odor sampling: the effect of freezing. "Body odor sampling is an essential tool in human chemical ecology research. However, methodologies of individual studies vary widely in terms of sampling material, length of sampling, and sample processing. Although these differences might have a critical impact on results obtained, almost no studies test validity of current methods. Here, we focused on the effect of freezing samples between collection and use in experiments involving body odor perception. In 2 experiments, we tested whether axillary odors were perceived differently by raters when presented fresh or having been frozen and whether several freeze-thaw cycles affected sample quality. In the first experiment, samples were frozen for 2 weeks, 1 month, or 4 months. We found no differences in ratings of pleasantness, attractiveness, or masculinity between fresh and frozen samples. Similarly, almost no differences between repeatedly thawed and fresh samples were found. We found some variations in intensity; however, this was unrelated to length of storage. The second experiment tested differences between fresh samples and those frozen for 6 months. Again no differences in subjective ratings were observed. These results suggest that freezing has no significant effect on perceived odor hedonicity and that samples can be reliably used after storage for relatively long periods." 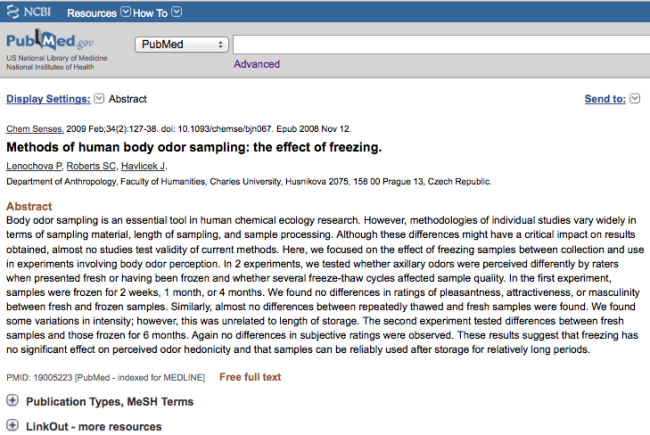 Discoblog: NCBI ROFL: How the hell does one end up as a doggy breath odor judge?