NCBI ROFL: How is a giant sperm ejaculated? 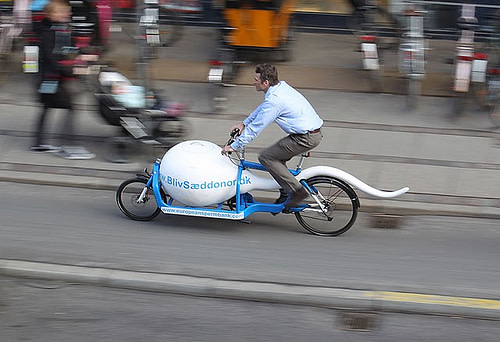 How is a giant sperm ejaculated? Anatomy and function of the sperm pump, or "Zenker organ," in Pseudocandona marchica (Crustacea, Ostracoda, Candonidae). "'Giant sperm', in terms of exceptionally long spermatozoa, occur in a variety of taxa in the animal kingdom, predominantly in arthropod groups, but also in flatworms, mollusks, and others. In some freshwater ostracods (Cypridoidea), filamentous sperm cells reach up to ten times the animal's body length; nonetheless, during a single copulation several dozen sperm cells can be transferred to the female's seminal receptacle. This highly effective ejaculation has traditionally been credited to a chitinous-muscular structure within the seminal duct, which has been interpreted as a sperm pump. We investigated this organ, also known as the Zenker organ, of a cypridoid ostracod, Pseudocandona marchica, utilizing light and electron microscope techniques and produced a three-dimensional reconstruction based on serial semi-thin histological sections. This paper shows that numerous muscle fibers surround the central tube of the Zenker organ, running in parallel with the central tube and that a thin cellular layer underlies the muscular layer. A cellular inner tube exists inside the central tube. A chitinous-cellular structure at the entrance of the organ has been recognized as an ejaculatory valve. In male specimens during copulation, we confirmed a small hole derived from the passage of a single spermatozoon through the valve. The new data allowed for proposing a detailed course of operation of the Zenker organ during giant sperm ejaculation." Bonus figure from the full text: 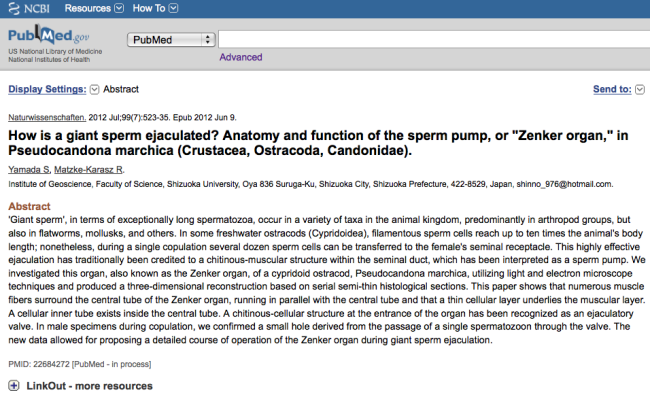 Discoblog: NCBI ROFL: An explanation for the shape of the human penis.