NCBI ROFL: Goose mafia asks "Are you honkin' at me?" 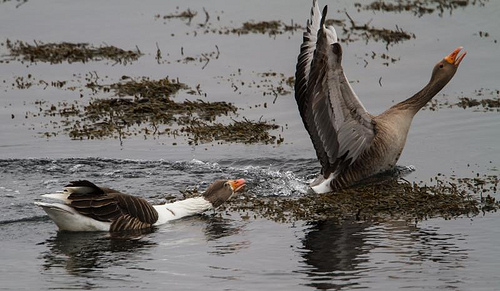 Serial agonistic attacks by greylag goose families, Anser anser, against the same opponent. "It is known from primates that alliance partners may support each other's interests in competition with others, for example, through repeated agonistic attacks against a particular individual. We examined serial aggressive interactions between greylag goose families and other flock members. We found that repeated attacks towards the same individual were common and that up to five serial attacks by family members followed an initial attack. Family size did not affect the frequency of such serial attacks. Juvenile geese evidently benefited most from active social support through serial attacks. About 60% of the juveniles' lost primary interactions were subsequently reversed by another family member. This may be one of the reasons why juveniles rank higher in the social hierarchy than would be expected from their age and size alone. Losses in serial attacks predominantly occurred against other, presumably higher-ranking, family geese and ganders. We propose three major functions/consequences of serial attacks. Analogous to primates, serial attacks in greylag geese may serve to reinforce a losing experience of an opponent defeated in a preceding attack. On the side of the winning family, serial attacks may reinforce the experience of winning. Both winning and losing experiences are linked with physiological consequences in higher vertebrates, affecting the future social performance of winners or losers. Finally, serial attacks may signal the agonistic potential of a family to other flock members. This is supported by heart rate data, which indicate that greylags are competent to interpret third-party relationships." 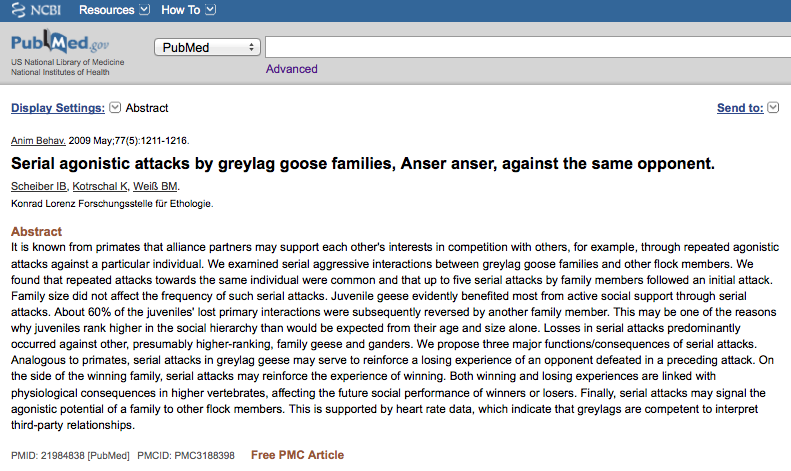