NCBI ROFL: Gelotophobia: more common than you might think. 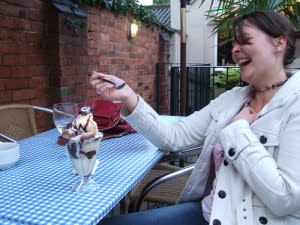 Gelotophobia in Israel: on the assessment of the fear of being laughed at. "Gelotophobia is defined as the fear of being laughed at. Empirical studies revealed that it is a valid and useful concept which deserves further attention. Furthermore, gelotophobia is of relevance among nonclinical groups, and it should be best conceptualized as an individual differences phenomenon that ranges on a dimension from low to high fear of being laughed at. The present study presents the first empirical data on the fear of being laughed at in Israel (N = 220). It describes the adaptation of an instrument for the subjective assessment of gelotophobia to Hebrew. The translation yielded good psychometric properties in terms of high reliability . The Hebrew-GELOPH is best described with a one-dimensional factor solution. Items referring especially to the avoidance of places where one has made an embarrassing impression yielded higher endorsements. Gelotophobia was more prevalent among younger participants, females, and participants who were not in a relationship. Approximately 6% exceeded a cut-off score indicating at least a slight expression of gelotophobic symptoms. Results are discussed with respect to further application of the questionnaire in research and practice. If confirmed by additional studies it will have a significant implication on the understanding of gelotophobia in relation to social phobia and related phobias." 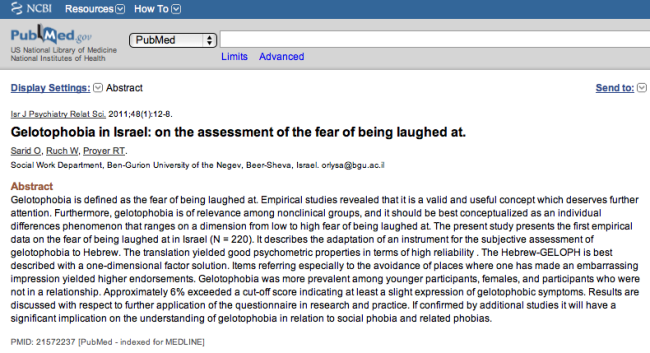 Discoblog:NCBI ROFL: What do Jews do while they poo?