NCBI ROFL: Do nachos count as a meal? Depends on which college student you ask. 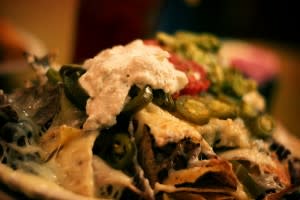 Categorization of foods as "snack" and "meal" by college students. "The cognitive representation of a food as being a "snack" or a "meal" influences eating behavior. We found previously that subjects who considered a particular food to be a 'snack' ate significantly more calories when tested later than subjects who considered the same foods as a 'meal'. We conducted two surveys to determine the categorization of foods as "snacks" or "meals". Survey 2 included a larger variety of foods with detailed descriptions and a response option of "never tried". Both surveys found that potato chips, crackers, cookies, and nuts were consistently viewed as snacks, while soups, burritos, pizza, and pancakes were consistently viewed as meals. Useful for future research are foods we found that students varied in considering a snack or meal. Survey 1 found that half the respondents viewed toast, cheese on toast, muffins, and French fries as snacks and the other half as meals. Similarly, in Survey 2 potato salad, toast with jam, English muffin, cinnamon rolls, and nachos were categorized almost equally as snack and meal. These foods can be used in studies looking at the effects of categorizing a food as a meal or snack on other behaviors or categorization, while controlling for the food item." 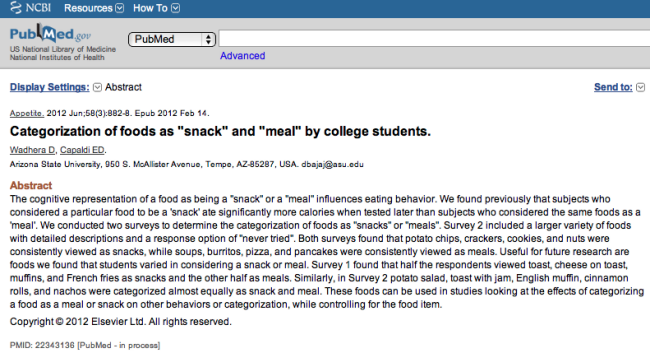