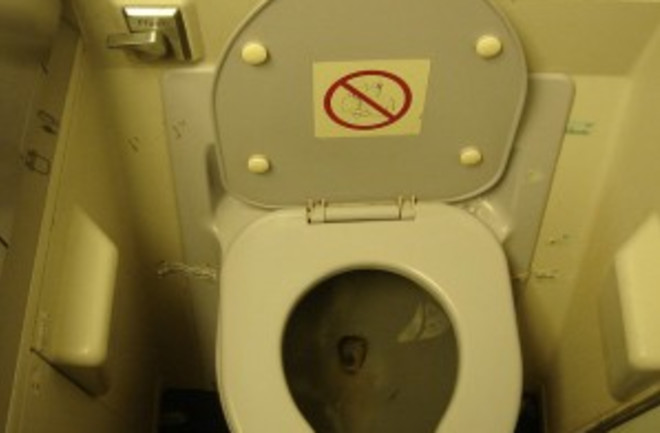 A 37-year-old white female was using a vacuum toilet on board an airplane. The toilet seat was upright. The woman was sitting directly on the commode. After flushing while still seated, she experienced pain in the perineal area. She was unable to remove herself from the toilet because of the created suction and she required assistance from the flight attendants. The patient experienced vaginal bleeding, and bright red blood was noted in the toilet. Paramedics were called when the plane landed. There was no diversion of the aircraft...

...Two risk factors for vacuum toilet injury can be detailed. First, obese patients may completely occlude the opening of the toilet, and second, improper use of a vacuum toilet may also contribute to the creation of suction. The patient in our case had raised the toilet seat and was seated directly on the toilet rim, which may have resulted in a stronger occlusive seal. A contributing factor may have been proximal muscle girdle weakness (which can be present in patients with neuromuscular diseases and the elderly). This could prevent a person from freeing themselves from the toilet.

There are no warning signs against flushing vacuum toilets while remaining seated. The only warning sign for the toilet is a multilingual sign that states the following in English: “Flushing toilet -please do not put objects such as paper towels, diapers, or air sickness bags in toilet.” Although this type of injury appears to be uncommon, responsible agencies (e.g., the FAA) are e couraged to document future incidents, educate flight attendants for the potential for injury when vacuum toilets are used, post a warning sticker about improper use of toilet seats, and encourage a redesign of the toilet so that flushing is not possible while the user remains seated."