Nazis And Dead Dogs: Spaceflight Before The Space Race 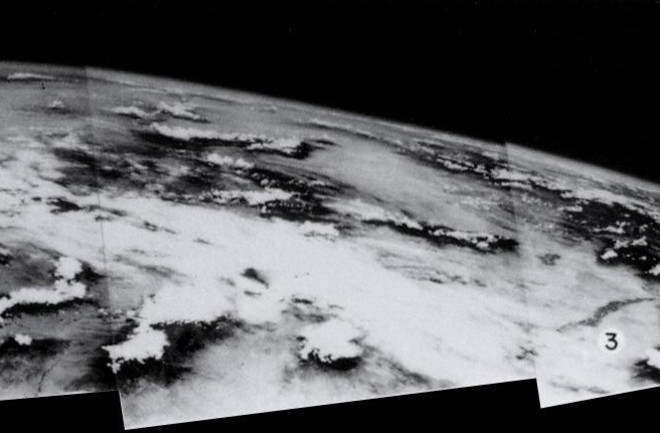 The first image of Earth from space was taken by a V 2 rocket launched from White Sands, New Mexico. (Credit: Johns Hopkins Applied Physics Laboratory) In October 1957, a basketball-sized metallic sphere began circling Earth, transmitting a beacon from above. For many, the launch of Sputnik 1 heralded in the Space Age. But lost often in the story of Sputnik, the Space Age, and the Space Race is that Sputnik wasn’t the first spaceflight, and that the first image of Earth from space didn’t come in the 1960s, but the 1940s. The actual first spaceflight is a matter of debate. The Air Force defines space as starting at 50 miles (80 kilometers) while NASA and others generally believe that the boundary of Earth and space is 62 miles (100 km). That definition places the date of the first space launch in the midst of World War II. But, of course, it wasn’t the good guys launching the rockets.

A lone V 2 rocket leveled much this London block in 1945. (Credit: Imperial War Museum/Wikipedia) Nazi Assimilation “On October 3, 1942 the first successful test of the A-4 (V-2) rocket from Peenemunde reached about 85 km, which is space by some definitions including mine,” says Jonathan McDowell, a Harvard astrophysicist who also studies near Earth space. “The General in charge, Walter Dornberger, is reported to have said (in German) ‘today the Space Age is born.’ If you prefer 100 km as the boundary of space, one of the V-2 vertical tests in June 1944 from Peenemunde was probably the first.” These tests weren’t altruistic either — the Nazi Party was experimenting with the V-2 as a ballistic missile. This new weapon was designed to launch up at high velocities and crash back down to Earth at breathtaking speeds, inflicting maximum damage. German forces would go on to launch more than 3,000 V2s at Allied Forces, though only a handful of test flights made it up to the boundary of space. “We don't know accurate apogees for the operational launches, but (we) believe they were typically in the 90 to 100 kilometer range,” McDowell says. So while some rockets made it to space, others didn’t. As the war drew to a close, the V2 program scientists surrendered to Allied Forces. The Jewish prisoners and members of other groups targeted by the Nazis at the Mittelbau-Dora concentration camp were released. Many of them had been forced to work as slaves on the V-2 projects. Georg Rickhey, the director of the Mittelwork factory that built V-2s, was charged with war crimes, but ultimately acquitted. Rickhey and 1,600 of his deputies were brought over to the United States as part of Operation Paperclip. This happened as the Soviet Union was taking in 2,200 former Nazi rocket scientists. Both sides were clear in their goal: to create intercontinental ballistic missiles. But the Army also began to explore the possibilities of using the V-2 for space science.

The Soviet space pup, Strelka, now taxidermied and on display at a museum. (Credit: Pretenderrs/Wikipedia)

The first spaceflight with a science payload came in 1946. In May 1946, a V-2 launched by the Army carried a cosmic ray experiment built by the Applied Physics Laboratory. A few years later, APL would set another record. “Another APL cosmic ray experiment on March 5, 1948 from White Sands was the first space launch on a rocket not originally designed as a weapon — the Aerobee sounding rocket,” McDowell says. Soon after, in 1947, a V-2 rocket launched by the United States launched and returned a precious payload: the first pictures of Earth ever taken in space. This was just a month after the first animals had reached space — in this case, fruit flies. The first large animal, a macaque, or type of monkey, made it to space aboard a V-2 in 1949. His name was Albert II, named for his predecessor Albert, who had reached high altitudes but failed to make it to the boundary of space. By 1951, the Soviets had sent two dogs, Dezik and Tsygan, to space. Both were recovered safely. But on July 29, 1951 — just one week after the pup’s first flight — Dezik and another space dog, Lisa, were killed when their parachute failed to deploy. Accidents were the exception, not the norm, in these early animal suborbital experiments, but on February 21, 1958, two Soviet spacedogs, Palma and Pushok, were killed when their cabin decompressed. That was just a few months after Laika, the first animal to reach orbit, had died on November 3, 1957, when she overheated a few hours after reaching orbit. While those are gruesome stories, the United States didn’t have a great track record either. In 1951, a monkey died aboard an Aerobee rocket experiment. The rocket hadn’t made it to space, reaching altitudes of 38 miles (61 km) before coming crashing down, killing the unnamed monkey on impact. Most other animals lost by American suborbital rockets were mice, however. Suborbital spaceflight never went away, of course. Sounding rockets are still used today. But an interesting experiment took place just weeks after the Sputnik 1 launch. Fritz Zwicky, a Caltech astrophysicist who was a pioneer in dark matter research, wanted to send a sounding rocket up, and perform an experiment after it reached space: it would explode out a couple of projectiles which would, with all hope, achieve escape velocity from the Earth system. The Aerbee rocket reached an altitude of 54 miles on October 16, 1957, just above the military definition of space but below later figures. The tiny projectiles were reported to have left the Earth-Moon system after their thermite fuel discharged and shot toward parts unknown. While Zwicky claimed they left the system, McDowell doubts the veracity of those claims. “It was part of a series of experiments to fire artificial meteors of know composition into the atmosphere to let astronomers figure out the mass of natural meteors from their brightness,” McDowell says. Indeed, Zwicky had been attempting the experiment since 1947, succeeding 10 years later.

The first launch from Cape Canaveral took place in 1950. It was a V 2-inspired Bumper Rocket, which were used to study the upper atmosphere and even cosmic rays.(Credit: NASA/U.S. Army/Wikipedia) At this point, though, a lot of attention was on orbital and human spaceflight experiments. After 15 years of touching space, humans were finally making launches that stayed up there. Bizarrely enough though, McDowell says that the Sputnik 1 launch was the first attempt at orbital spaceflight. After all those launches aboard small rockets, no one had really attempted an orbital flight. “In fact we know enough about US and Soviet programs of the time to be confident that Sputnik 1 (PS-1) was the first orbital attempt by either side,” McDowell says. “None of the previous launches came close.” But without that decade-and-a-half of prior experiments, humans might never have made it to orbit in the first place, providing an essential — but oft forgotten — era in the lead-up to the Space Race.