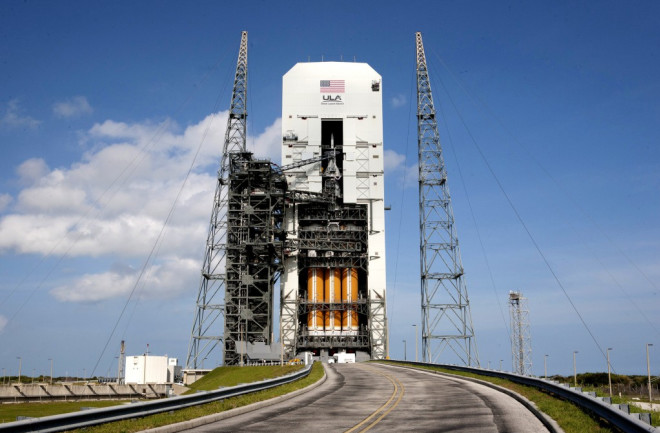 Update (Friday, Dec. 5): At 11:29 a.m. Eastern Time NASA’s experimental Orion spacecraft splashed down in the Pacific Ocean, and in the process ushered in a new era of space exploration in the United States.

After launching at 7:05 a.m., the unmanned Orion spacecraft raced 3,630 miles above the Earth’s surface and into the Van Allen belt — a radiation cloud shrouding the planet. The entire journey lasted just over 4 hours, and Orion reentered the atmosphere reaching a speed of 20,000 miles per hour before deploying a series of parachutes to ensure a soft landing.It’s the highest any human-grade spacecraft has traveled in over four decades. Although Orion took radiation measurements in the Van Allen belt, the mission’s biggest success is that everything worked to near perfection. That’s a big win for NASA, since Orion is the craft that could someday taxi humans to an asteroid or even Mars. [embed width="500" height="400"]http://youtu.be/UEuOpxOrA_0[/embed]

Update (Thursday, Dec. 4): The first step toward sending humans to Mars will have to wait another day. NASA on Thursday announced that it had scrapped the launch of Orion, which was originally scheduled for 7:05 a.m. Eastern Time Thursday. Wind gusts and a valve issue forced the agency to postpone. The next possible launch window will open at 7:05 a.m. Friday.

NASA wants to get back in the business of sending astronauts into deep space, including Mars. Today will be a big test for fulfilling those aspirations. At 7:05 a.m. Eastern Time, NASA launched the first test flight of its Orion spacecraft — the chariot that could taxi astronauts to the Red Planet and beyond by the late 2030s. On its unmanned inaugural journey, scientists hope to learn more about the craft’s safety systems and durability.

From blast-off to splashdown, Orion’s entire $370-million journey will be completed in just a matter of hours. Fastened atop a Delta IV Heavy rocket, Orion will reach an altitude of 3,600 miles above Earth — 15 times higher than the International Space Station. After orbiting our planet twice, Orion will reenter Earth's atmosphere at 20,000 miles per hour, and its heat shields will need to withstand temperatures of 4,000 degrees Fahrenheit. When the craft finally splashes into the Pacific Ocean it will have covered more than 60,000 miles in a 4.5-hour journey.

Credit: NASA NASA plans to conduct a second test run for Orion in 2018, when the craft will make a trip around the moon and back. If all goes as expected, and funding stays on track, a manned mission around the moon is slated to occur in 2021. Moving forward, the craft could carry astronauts to an asteroid in the late 2020s and perhaps to Mars by the late 2030s.

Blast from the Past

Orion is the future of space exploration at NASA, but it bears a striking resemblance to the cone-shaped spacecraft that ferried Apollo astronauts to the moon and back. Orion is about 30 percent larger than the Apollo capsules, and can house up to six crew members for missions up to 21 days in duration. It can also attach to other craft for extended journeys.

NASA is now running live Orion coverage, which will continue throughout the day from launch to landing. When Orion returns to Earth, NASA’s unmanned drone plane Ikhana will soar to 27,000 feet to provide real-time, birds-eye footage of the spacecraft’s descent.