NASA’s Orion Crew Capsule May Launch on a Commercial Rocket 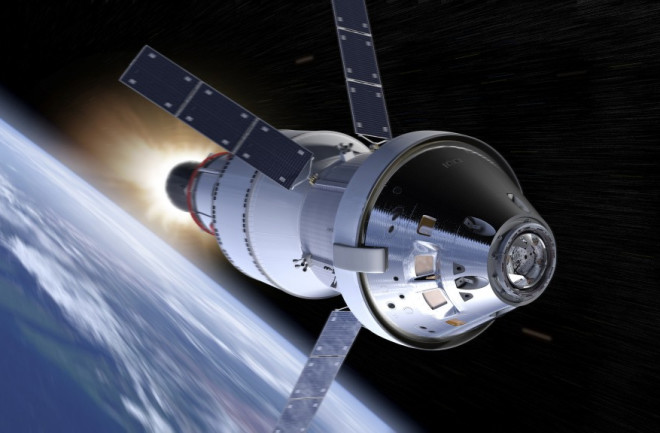 NASA's Orion crew capsule may launch on its first big test flight on a private rocket, instead of NASA's planned SLS. (Credit: NASA) For years, NASA has been working on their massive Space Launch System (SLS), a next-generation heavy lift rocket that could launch cargo and astronauts beyond low-Earth orbit for the first time since the Apollo Program. They've been developing it in tandem with Orion, a crew capsule that would carry those astronauts into Earth orbit and beyond. Orion’s next big test flight, called EM-1, an uncrewed mission into lunar orbit, is currently scheduled for June 2020. But in a Senate committee hearing yesterday morning, NASA Administrator Jim Bridenstine acknowledged that SLS is “struggling” to meet its schedule, and that if they want to launch Orion on time, they should look to private spaceflight to provide the means. While Bridenstine didn’t mention which commercial companies he was thinking about, only two companies will have rockets ready within the next year or so that offer the heavy lift needed to launch Orion: United Launch Alliance or SpaceX. But even those companies couldn't launch Orion on its scheduled test into lunar orbit. Instead, one rocket would launch Orion into Earth orbit, while a second rocket would deliver an upper stage into nearby orbit. Orion would then have to dock with this second-stage rocket in orbit (a capability Orion does not currently have) and then use it to head for the moon. Bridenstine said NASA will be investigating this approach in the coming weeks to see if it’s feasible, and he acknowledged that additional funding from Congress might become necessary. Bridenstine stood by SLS’s importance for future flights, including Orion’s crewed EM-2 mission scheduled for 2023. But in budget materials released earlier this week, NASA revealed that they are willing to launch the first pieces of their planned Lunar Gateway space station on commercial rockets as well. The usefulness of SLS can only fade as its schedule continues to slip and commercial vehicles outstrip its capabilities and take up its planned missions. Nonetheless, the budget proposed this week by the administration continues to fund SLS development, and Congress has stood by the program in past years, wanting NASA to have its own access to space without being forced to rely on commercial programs as they have relied on Russian Soyuz rockets for the past eight years.