NASA's New Mars Mission: To Study the Mystery of the Missing Atmosphere 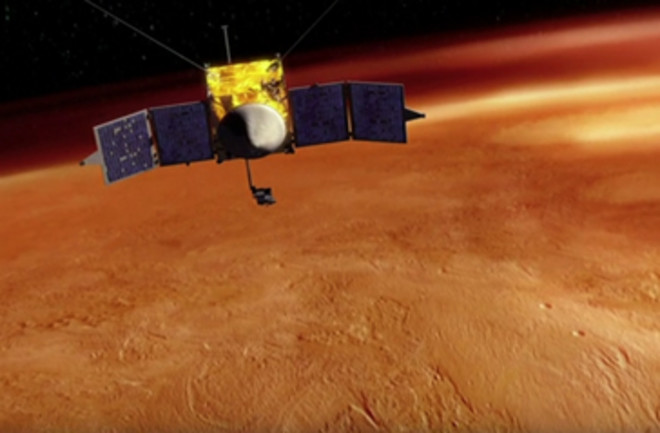 NASA's next rendezvous with the Red Planet got the go-ahead this week. The space agency approved development of MAVEN, the Mars Atmosphere and Volatile Evolution mission, which is scheduled to launch in November 2013. In the last decade, missions like the Phoenix Lander, the Spirit and Opportunity rovers, and the Mars Express have reinforced the case that our neighbor was once watery, and far more hospitable to life than the planet we see today. The ancient evidence of liquid water suggests that the planet once had a dense atmosphere, which is now long gone. MAVEN's mission is to investigate the interaction between Mars's now-thin atmosphere and the solar wind, and to look for clues to how and when the sun stripped away the planet's thick atmosphere. Many researchers think that Mars's loss of its magnetic field billions of years ago started the process.

"Mars can't protect itself from the solar wind because it no longer has a shield, the planet's global magnetic field is dead," said [lead investigator Bruce] Jakosky, describing how the magnetic field disappeared and the atmosphere then exposed to the punishing solar wind. [AFP]

For more details about MAVEN, check out our coverage from 2008

, when NASA first announced the mission. The team's critical design review will come next July, which could be the true make-or-break time for the mission. Related Content: 80beats: NASA Announces Plan to Study Martian Climate Mystery

80beats: Was Mars’ Moon Phobos Born From a Violent Collision?