NASA's Mars Lander Is Preparing to Peer Beneath the Planet's Surface 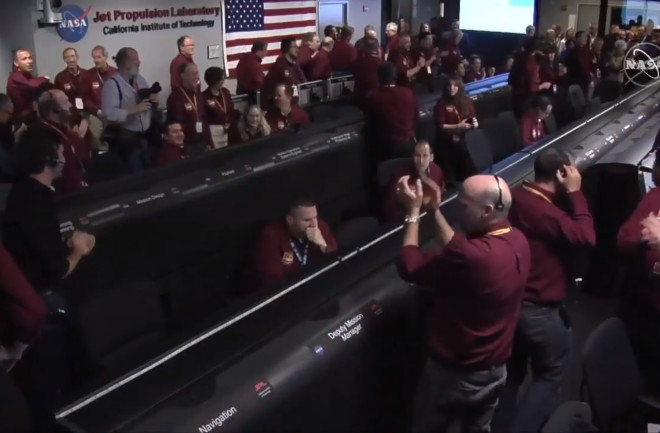 November 26 at 2:54 ET, NASA’s InSight lander touched down successfully on the martian surface. Now, once the dust settles around the landing site in Elysium Planitia, the probe will get to work expanding our understanding of the Red Planet — specifically, what's inside of it. After initially landing, InSight, short for Interior Exploration using Seismic Investigations Geodesy and Heat Transport, captured its first image of its surroundings. This will be followed by many more images of the martian surface as the probe begins to survey its immediate surroundings in preparation for deploying its various scientific tools. First up for InSight are basic tasks like taking images and gathering wind and temperature data. Next, after a few months, InSight’s robotic arm will place its scientific instruments on the surface to begin exploring the Red Planet. This will be the first time that a robotic arm will be used to put instruments on the martian surface in this way, Ravi Prakash of NASA’s Jet Propulsion Laboratory (JPL) said to Mission Control during NASA’s InSight landing livestream. "We've studied Mars from orbit and from the surface since 1965, learning about its weather, atmosphere, geology and surface chemistry. Now we finally will explore inside Mars and deepen our understanding of our terrestrial neighbor as NASA prepares to send human explorers deeper into the solar system,” Lori Glaze, acting director of the Planetary Science Division in NASA's Science Mission Directorate, said in a statement.

InSight has three primary instruments on board: A seismometer (SEIS), a heat probe (HP^3), and a radio science instrument (RISE). SEIS, the Seismic Experiment for Interior Structure, is a dome-shaped instrument that sits on the martian surface and records the planet’s seismic vibrations. SEIS will give researchers a peek into Mars’ interior, providing data about Mars’ seismic activity. By sensing the planet’s seismic pulses, researchers will be able to learn about events like marsquakes (earthquakes on Mars, as the name suggests) and meteorite impacts. HP^3, the Heat Flow and Physical Properties Probe, will burrow almost 16 feet (5 m) into the martian surface. This is deeper than any instrument has ever reached on the Red Planet. HP^3 will study the heat traveling outwards from Mars’ interior to figure out how much heat escapes the planet and what the source of this heat is. This will clue scientists in to how the planet formed, and whether that happened in the same way, and with the same material, as the Earth. RISE, the Rotation and Interior Structure Experiment, tracks the location of the lander to ultimately determine the size and composition of Mars’ core. RISE will aim to find out how much Mars’ North Pole wobbles as it orbits the sun, and this information could help reveal whether the planet has a molten core or not. Altogether, InSight’s instruments and observations aim to reveal key information about how warm and geologically active Mars is. Scientists hope that this information will support work studying the evolution of terrestrial planets like Mars.