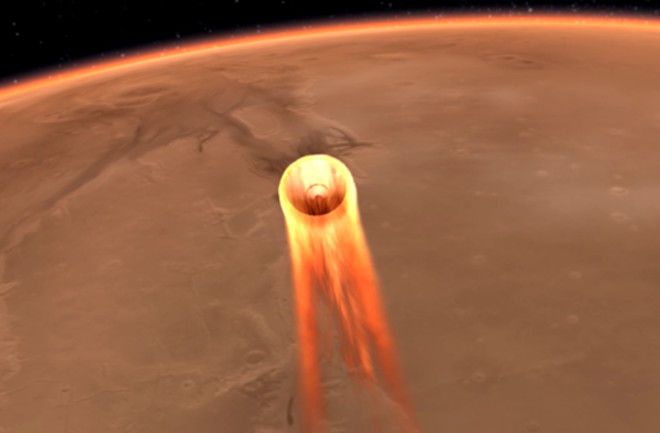 From atmospheric entry to landing, InSight will take about seven minutes to reach its final destination. (Credit: NASA/JPL-Caltech) NASA’s InSight lander has been on its way to Mars since May. Now, after six months and 301 million miles (485 million kilometers), InSight is set to touch down on the Red Planet’s surface at 2:54 P.M. Eastern Time this afternoon. The entire process, from atmospheric entry to landing, will take only about seven minutes.

InSight’s landing plan combines technology and techniques from past missions, aiming to successfully transport the 1,340-pound (608 kilograms) probe the 80 miles (128 km) from the top of Mars’ atmosphere to the surface. During the probe’s Entry, Descent, and Landing phase, it will enter the martian atmosphere at a speed of about 12,300 miles per hour (5.5 kilometers per second), with its heat shield reaching up to 2,700 degrees Fahrenheit (1,500 degrees Celsius) as the lander stays a comfortable room temperature inside its encapsulated descent stage. About three minutes and 7 miles (11 km) before touchdown, the probe’s nearly 39-foot (12 m) parachute will deploy, slowing the craft from 3,800 mph (6,100 kph) to 861 mph (1,370 kph).

InSight will use rockets to stabilize the probe and set it gently on the martian surface. (Credit: NASA/JPL-Caltech) But the parachute won’t carry InSight all the way to the surface. Less than a minute after the parachute deploys, the probe will first jettison its protective heat shield and extend its three legs. Then, with less than a minute until landing, InSight will separate from the parachute stage entirely and enter a final free fall toward the martian ground with just over half a mile (1 km) to go. The lander’s 12 descent engines will fire, slowing it down and straightening the spacecraft for what engineers hope will be a soft landing in the Elysium Planitia region of Mars, about 373 miles (600 km) north of the Curiosity rover’s initial landing site at Gale Crater. Elysium Planitia was chosen for its flat terrain and equatorial location, which will allow the stationary probe’s solar panels to collect sufficient sunlight to power it all year long.

Why all the hype, when this is just another landing on Mars? Because, despite all the careful calculations, technological improvements, and system backups, there is still only one chance to get this landing right. Everything — from the angle at which the probe first hits the martian atmosphere, to the exact time its three legs pop free, ready to absorb the shock of landing — must go right — and in the right order. What’s more, the current light travel time between Mars and Earth — the time it takes any signal sent from Mars to reach us here on Earth — is eight minutes seven seconds. That’s longer than the seven-minute landing sequence. The entire landing will have already taken place, and succeeded or failed, before we even know it has begun. Add to that the fact that fewer than half of all attempted Mars landings have ended successfully, and it makes for a nerve-wracking seven minutes, with engineers blind to the process until it is complete. The only companions InSight will have are its two Mars Cube One (MarCO) CubeSats, and the Mars Reconnaissance Orbiter (MRO), both in orbit above the planet. Both MarCO and MRO will communicate with InSight via UHF radio signal, but while both will also send this information back to Earth following landing, only the CubeSats will be able to do so immediately. The orbiter cannot receive and transmit data simultaneously, so it is the tiny satellites hat will likely inform Earth first of the landing’s outcome. These two tiny CubeSats, each measuring under 15 inches (37 centimeters) along their longest side, will act as InSight’s personal messengers, proving that CubeSats can fill this vital communications gap on future missions to Mars (and other planets). They will also provide additional landing data and telemetry for engineers to analyze after the fact, aimed at improving future missions' shots at successfully touching down on Mars. You can stay up to date on InSight’s status by checking the mission’s Landing Status page, as well as by tuning in to NASA’s live coverage on NASA TV. [This article originally appeared on Astronomy.com]