NASA's Newest Spacecraft Is Hunting New Worlds Like Never Before

It's ready to forge a new path through space. 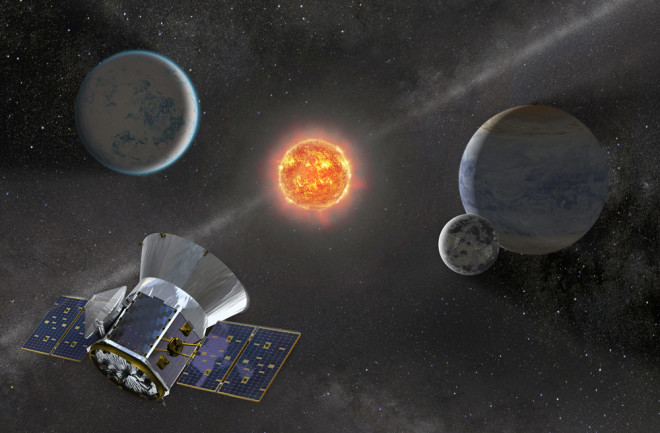 Sometime this spring, if all goes as planned, a SpaceX Falcon 9 rocket will carry the Transiting Exoplanet Survey Satellite (TESS) into space. Once in “high-Earth” orbit, the satellite’s instruments will scan the entire sky, hoping to find small planets outside our solar system. The main targets are potentially habitable worlds that are relatively nearby, within a few hundred light-years.

But the mission’s scientific objectives aren’t the only historic part: TESS also stands out because of the orbital path it will follow around Earth, blazing a course through space that no craft has ever flown. Thanks to the orbit’s elongated elliptical shape, says TESS principal investigator George Ricker of MIT, “we can stay away from Earth during observations and get close to Earth to transmit our data, once every 13 or so days.”

These and other orbital attributes will get TESS exactly where it needs to be — with relatively little expenditure of energy and money. That has caught the attention of scientists planning future space missions. It’s a unique orbit that, if not groundbreaking, is certainly “spacebreaking.”

Upon its launch from Cape Canaveral, TESS will circle our planet 3.5 times before zipping around the moon, whose gravity will then propel the satellite into its intended orbit. The orbit is named “P/2” because TESS will circle Earth every 13.7 days, half the period of the moon’s 27.3-day orbit; TESS will loop around Earth twice for every one trip the moon takes. The satellite’s trajectory is also inclined, tipped up at an angle of about 40 degrees from the plane of the Earth and moon.

“It’s kind of a magic orbit, which should give us long, unbroken observations for 300 hours at a stretch because the Earth and moon aren’t in the way,” Ricker explains. “It’s also a novel orbit that we had to develop and prove mathematically.” Joining him in this endeavor were specialists at the NASA Goddard Space Flight Center, which is responsible for guiding the mission, and at the Los Angeles-based Aerospace Corp.

Making preparations for a never-before-tried orbit might seem like a normal part of mission planning, but there’s surprisingly little variety in satellites’ paths. “For space astronomy, there are about half a dozen orbits that are typically used,” notes Ricker, but none of the standard ones seemed quite right for TESS.

The Wilkinson Microwave Anisotropy Probe, for example, used a so-called L2 orbit, as will the upcoming James Webb Space Telescope. L2 is an orbit around the sun that moves in lockstep with Earth, from almost a million miles farther out. But this remote orbit wasn’t a practical option because it requires a bigger, more powerful rocket than TESS’ budget would allow.

Ricker’s team also rejected a low-Earth orbit, such as the one the Hubble Space Telescope follows. The TESS satellite would have had to pass through a high-radiation zone, part of the Van Allen radiation belts, multiple times each day, which could take a toll on the craft’s sensitive equipment. Heat given off by Earth could also interfere with TESS’ measurements.

The P/2 orbit keeps the satellite at a much higher altitude, away from Earth’s radiation and heat. You can see better up there, just as the views are better from the top of a skyscraper than they are from the second floor. Plus, it takes only a modest amount of rocket fuel to reach the P/2 orbit, thanks to the moon’s gravitational boost. It’s the perfect path for TESS to take.

Minding Your P’s and 2’s

But sorting out the intricacies of TESS’ orbit, along with other vital aspects of the mission, has been a long haul. Ricker started working on the project a dozen years ago, and NASA rejected the first TESS proposal in 2008. He tried again with the help of Randy Persinger, an Aerospace Corp. consultant, and other colleagues.

By 2010, they had most details figured out, but still hadn’t settled on an orbit. There were a lot of requirements: It had to be big enough, and of long enough duration, to provide continuous, unobstructed looks at specific stars, yet still close enough to Earth that the mission’s smaller rocket could reach it.

The lunar-assisted orbit for the proposed X-ray observatory Arcus, inspired by TESS, would circle Earth four times for every lunar trip. | SAO/Orbital ATK

Luckily, another member of the TESS collaboration showed them a 2001 paper that contained the first serious discussion of a high-Earth, P/2 orbit. Ricker and Persinger quickly realized that this untested, “crazy orbit” might afford them extended stargazing times — but at a cost. “We probably read the paper a dozen times,” Persinger said. “This orbit had never been tried before, but we bet the future of TESS on it.”

The concern was that the orbit could be unstable, since it oscillated in several different ways. Imagine the orbit as a pliable surfboard balanced on a ball that represents Earth, the board’s edge serving as TESS’ flight path.

The oscillations mean the surfboard will periodically swivel from side to side and up and down, wildly changing the direction it points to. And just as the surfboard can roll forward or backward over the ball, so too can the orbit’s overall position change relative to Earth, varying by huge margins — up to 10 times Earth’s radius. Finally, the shape of the surfboard itself varies as well, getting wider or narrower while maintaining a constant length.

Ricker and his team eventually learned these oscillations could be kept under control, which hadn’t been established in the 2001 paper. “If you set up the initial conditions right,” Ricker says, “these oscillations will stay bounded — or stable, in other words.” Their colleagues at Goddard arrived at the same conclusion, using different numerical methods. P/2 would work.

NASA officially approved the mission in 2013 after Ricker and Persinger earned the support of a scientific review panel. “TESS would not have been selected for flight by NASA without the P/2 high-Earth orbit,” says Persinger. It’s an essential part of the mission.

While the TESS crew makes final launch preparations, other astronomers are eyeing its unique orbit. Randall Smith of the Smithsonian Astrophysical Observatory has adopted a slight variant, a P/4 lunar resonant orbit, for the proposed X-ray observatory Arcus. It would make four trips around Earth for every one the moon takes. And Lynx, a proposed successor to the Chandra space telescope, ranked “a TESS-type orbit” as among its best options. “We’re following in TESS’ footsteps here,” Smith says. “These lunar-assist orbits are ‘the new hotness,’ to steal a phrase from Men in Black.”

That’s perhaps an apt comparison for an orbit designed to help us spot the closest, most likely places for alien life. P/2 and other lunar-assisted orbits may well become useful for future missions, but TESS — to borrow another phrase from Men in Black — was still the first to “make this look good.”

[This article originally appeared in print as "Orbital Trailblazer."]