Rumors are flying right now that Mike Griffin, NASA's Administrator, is causing some friction with President-elect Obama's transition team for the space agency. The Orlando Sentinel is reporting considerable strife going on between Griffin, who apparently is trying to save the Constellation manned flight program, and the team Obama has selected to help NASA move into the new era. 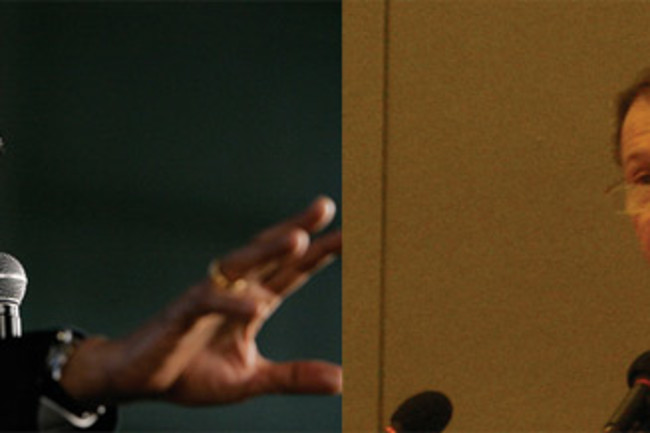 There are reports of arguments, back-room meetings, managing of messages, and so on. The reports in the article are anonymous (though from multiple unnamed sources), so take them with some skepticism. However, there is also a ring of truth to them in my ear. Griffin must know his chance of staying on as NASA chief is very low; his ridiculous statements about global warming (and luke-warm apology later) pretty much guarantee that. I imagine Obama has quite a list of potential replacements, and if I know that, so does Griffin. The Constellation program -- the next step in manned space flight, designed to get us back to the Moon and eventually to Mars -- is Griffin's baby, and I would guess he's concerned that the new Obama Administration may attack it. This would understandably make Griffin defensive, and he would do what he can to ensure the program will continue after he is gone. I'm concerned about that too, in fact. Constellation has problems, and of course is over budget, but I think it's the right move for the space agency right now. The Shuttle is being retired (as well it should; it was originally a good idea, but even by the time Columbia first launched in 1981 the system was a white elephant), and love it or hate it, the manned space exploration program must go on. That's where the money is from Congress, and that's what the public thinks of when they think NASA. I wish NASA would do a better job of promoting the unmanned program -- remember, if you read this blog you probably are predisposed to supporting scientific exploration, which makes you a person who is not a typical member of the public! -- but until then, the manned work is the agency's bread and butter. I have been and probably always will be ambivalent about Griffin. He has done some magnificent work at NASA, but has also really stepped in it. I still wonder what his role was in the Deutsch affair, and I've disagreed with his spin on other issues as well. But NASA has done OK under his command, which, let's face it, has seen some very difficult times. I hope that if and when Obama picks a new person to head NASA, it's again an engineer like Griffin, someone who has had their sleeves rolled up before when it comes to working on the space program. And I hope that Griffin makes that possible as well. Obama's and Griffin's teams may have a lot to disagree about, but I hope they can work that out and understand that the overall, overarching goal is to keep NASA strong, vigorous, and healthy. The future of humanity is in space. Politics should be making that easier to achieve, not harder.