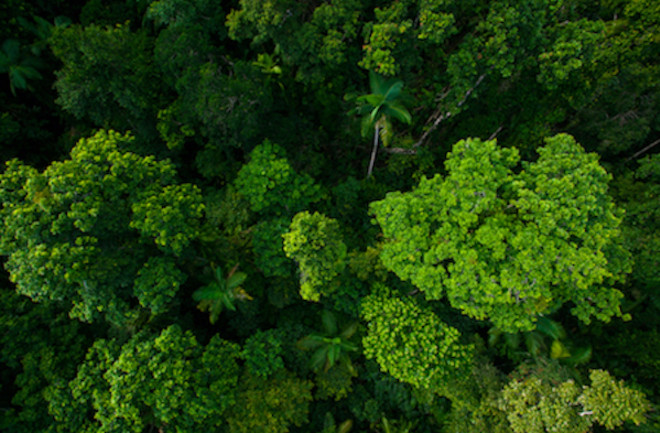 (Credit: Shutterstock) The Jedi in Star Wars is all about the force, but NASA’s GEDI is all about the forest. On December 5, the space agency launched their tree-tracking Global Ecosystem Dynamics Investigation (GEDI) instrument to the International Space Station (ISS), where it will use laser light to create 3D maps of Earth’s forests and estimate their carbon emissions. Unlike most mappers, GEDI is able to peer below tree canopies and see the vegetation that lies beneath — giving insight into carbon cycling, habitat quality and how human activity impacts forest health. The mission, which was chosen as NASA’s Earth Venture-Instrument in 2014, will be powered on today aboard the Japanese Experiment Module. Carbon and Canopies The fossil fuels that power cars, homes and manufacturing all cause carbon dioxide (CO2) to leach into Earth’s atmosphere, but so does deforestation. Ralph Dubayah, GEDI’s principle investigator, says that trees are made up of about 50 percent carbon by mass. And when they’re chopped down, that carbon floats up into Earth’s atmosphere and helps it hold in heat from the Sun — warming Earth through the greenhouse effect. But on the flip side, younger trees actually pull more CO2 from the atmosphere than they release. Just how much CO2 is being emitted and soaked up by trees, though, is unknown. “Conventional satellite data can show you when a patch of forest has been lost, disturbed or degraded, but you don’t know how much that deforestation has contributed to atmospheric CO2,“ said Dubayah, who’s also a professor of geographical sciences at the University of Maryland, College Park. “The net balance between how much you lose through deforestation and how much you gain through regrowth is one of the largest uncertainties in the global carbon cycle.” To help solve this mystery, GEDI will use a light detection and ranging (lidar) laser system to penetrate forest canopies and create 3D maps of the vegetation that lies beneath them. By measuring the heights of underlying trees, researchers will be able to estimate their weight and age — shedding light on how much carbon they’re absorbing and how much they would emit if they were cut down. This technology could help scientists devise plans to reduce CO2 emissions, but it could also benefit critters living in the forests. Although GEDI can’t pinpoint the exact species of plants and trees, it can layout a forest’s overall structure and see if it fits the preferences of certain species. From there, habitats could be contoured to fit the needs of at-risk animals, helping sustain their populations and long-term survival. But like any other mission, GEDI isn’t without limitations. Different types of trees have different levels of carbon density, so its inability to distinguish species could hurt the overall accuracy of its data. The orbit of the ISS will also restrict the areas that GEDI can map, with coverage ranging from 51.6 degrees north to 51.6 degrees south. While this will cover most temperate and tropical forests, it will miss big chunks of forest that sit in-between. Regardless of its shortcomings, the 2-year mission will provide never-before-seen data of Earth’s forests and provide crucial information about global warming and habitat preservation. Overall, you could say that GEDI’s goal is to have the forest always be with you.