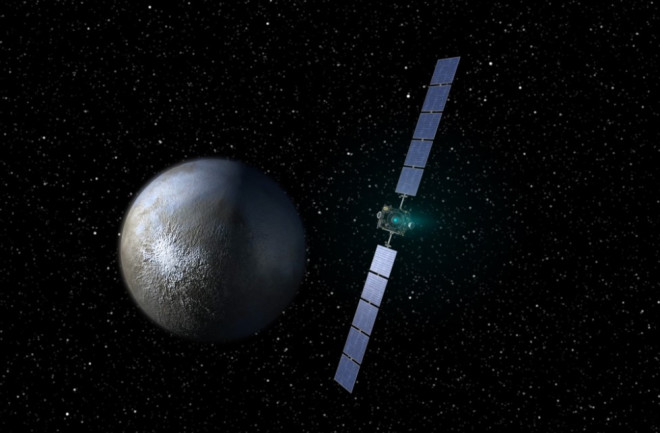 An artist’s concept of the Dawn spacecraft arriving at Ceres. Today, dwarf planet Ceres became the first such planet to have company over. The visitor is NASA’s Dawn spacecraft, which reached its final destination — an orbit around this 590-mile-wide ball of ice and rock — after more than seven years in space. And now that Dawn is finally all up on this space rock, astronomers can take sharp snapshots of its surface and learn about what makes Ceres Ceres, which they’ll do for the next 16 months. In the process, they will investigate why some planet-like objects didn’t quite grow into planets (sorry, Pluto — we're looking at you), what the solar system was like billions of years ago, and what that tells us about Earth today.

A New Day for Dawn

NASA launched Dawn in 2007, way back when Steve Jobs first announced this crazy thing called an iPhone. It traveled for four years to arrive at Vesta, a giant asteroid, where it spun around the surface for 14 months. Then, in 2012, Dawn’s ion drive (for real) propelled it out of orbit and back on its journey. It began its approach to Ceres in December, beaming back HD images of the dwarf planet starting in late January.

Sicilian astronomer Giuseppe Piazzi first saw Ceres in 1801. He called it a planet. But soon, other observers began to see more stuff like Ceres in the same region of space. That area became known as the asteroid belt, and Ceres became an asteroid. But Ceres is huge. If you spread its surface over the United States, it would cover more than one-third of the continental land. So in 2006, at the same time that Pluto got demoted, Ceres received a promotion: both “bodies” (as astronomers call them) are now officially dwarf planets. They have enough gravity to pull themselves into spheres, but they haven’t swept up or kicked out all the debris in their orbits.

Ceres formed in the very early days of the solar system, when bits of debris were smacking into each other, sticking together, and snowballing into planets. Ceres stopped growing before it became fully fledged. But that arrested development makes Ceres a time capsule: one that shows us what the solar system used to be like, and what it was made of, back in its Wild West days. Ceres seems to be about 25 percent water. The water on Earth had to come from somewhere. That’s not to say it came from Ceres (it didn’t), but it may have come from objects a lot like Ceres. Last year, the Herschel space telescope spotted two plumes of water shooting from the surface. Some scientists speculate that these are like the icy volcanoes on Enceladus, which means an ocean might slosh below the icy surface, but nobody knows yet. They could be the result of meteorites crashing into the surface and kicking up the ice we know is there. Curiously, though, the plumes roughly correspond to two eerie bright spots in one of Ceres’ craters. (See top image.) That correspondence could point to coincidence, “cryovolcanoes,” crashes — or none of the above. There’s lots of speculation right now, but the whole point of Dawn is to get some cold, hard, high-res images and composition analysis.

Twin jets of steam were spotted coming from Ceres in late 2012, as shown in this illustration. Credit CNRS/Y Gominet, B Carry

Dawn will tell us what those spots are, where the water came from, maybe more about where our water came from, and all about the craters pocking Ceres’ surface. NASA wants to avoid a debacle about crater naming — like the debate that ensued after a company called Uwingu asked people to pay for the privilege of christening martian craters (for the record, I named mine “Sarah’s big hole in the ground”). This time, Cerian features will be named “for gods and goddesses of agriculture and vegetation from world mythology” and “agricultural festivals.” Even if we can’t name Ceres’ geography, Dawn will allow us to connect with Ceres in other ways. What would it be like to stand on a world that is almost — but not quite — a planet? Dawn will enlighten us.