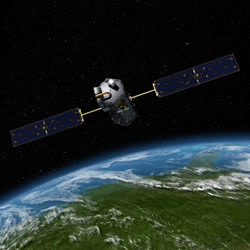 I just heard that the launch of Orbiting Carbon Observatory -- a NASA satellite designed to measures the sources, sinks, and amount of carbon dioxide in Earth's atmosphere -- failed today. They say that it looks like the fairing, the clamshell surrounding the satellite at the top of the rocket, on the Taurus XL rocket failed to separate.

So it's in orbit, but the satellite is still inside the fairing, rendering it useless.

It never made orbit, and came down in the ocean near Antarctica. NASA has organized a Mishap Investigation Board and they are looking into it. The rocket is built by Orbital Sciences. I'll have more info as it develops.

[Update (10:00 Mountain time): As noted in the comments below, space.com is reporting that the satellite and fairing dropped into the ocean near Antarctica. I have not heard the official word from NASA yet, but if true then my statement above about the satellite reaching orbit is incorrect.]