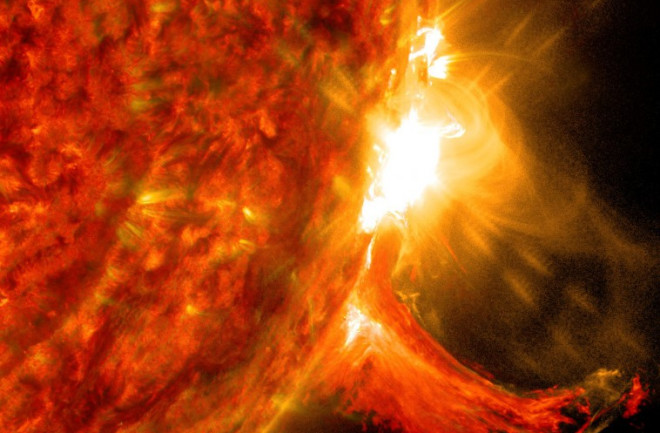 A massive cloud of solar material was blasted out into space when a flare erupted from the Sun on Oct. 2, 2014. The action was captured by NASA's Solar Dynamics Observatory. (Source: NASA/SDO) On October 2, the Sun let loose with a bright flash of radiation — a solar flare — propelling a cloud of particles probably weighing a trillion tons or so out into space at a million miles per hour.

SDO spacecraft. (NASA) Solar flares and associated plasma belches likes this (the latter are known more properly as coronal mass ejections) are relatively common during the peak of the ~11-year solar cycle — which is occurring right now. The flare was moderate in magnitude (M7.3 class). While the flare itself may not have been particularly noteworthy, the high-resolution image of the solar plasma being flung out into space is undeniably spectacular. It was captured by NASA's Solar Dynamics Observatory spacecraft. In geosynchronous orbit around Earth, SDO has a continuous view of the sun. (That's SDO in the thumbnail image above. Click it for an enlarged view.) https://www.youtube.com/watch?v=C1Kact6QHG0&list=PLF14609877EF3419B The video above shows the action in different wavelengths of light. The gold-colored view in particular highlights the fine structure of giant loops of material that arc over the sun's surface. These are coronal loops, which typically form around sunspots and active regions of the sun. Here's a good explanation from NASA's Marshall Space Flight Center:

These structures are associated with the closed magnetic field lines that connect magnetic regions on the solar surface. Many coronal loops last for days or weeks but most change quite rapidly . . . Some loops, however, are associated with solar flares and are visible for much shorter periods. These loops contain denser material than their surroundings. The three-dimensional structure and the dynamics of these loops is an area of active research.

I'll leave you with this thought: M-class flares like this one are a tenth as strong as X-class flares. In September, I was lucky enough to be in Norway when two X-class flares erupted from the sun, causing the night sky above the city of Tromsø to glimmer and glow with the lovely green light of the aurora borealis. If you haven't seen my post about it — with photographs of the aurora — check it out here.