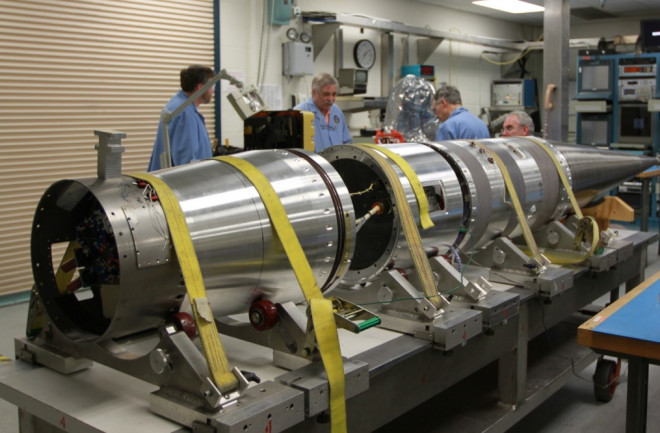 If you live along the Eastern seaboard, keep an eye on the sky tonight. NASA will be launching a rocket sometime between 5:30 and 6:50 p.m. EST from its flight facility in Wallops Island, Virginia.

is a practice run for two upcoming space observation missions. It will be loaded with two different kinds of lithium canisters. Once ignited, the lithium will vaporize and produce two cloud-like trails that will appear red in the sky. Since they are higher in the atmosphere they will be illuminated by the sun, even though it will no longer be visible from ground level. Assuming a clear night, the vapor trails should be visible to the naked eye along the length of the East Coast, from Canada to Florida, for a short time. By watching how the vapor trails move, with cameras on the ground and in the air, researchers can compare the two canisters' trailblazing properties. If you want to keep an eye on the rocket in real-time, follow it on the Wallops facility's Facebook

. Or check out Space.com's coverage

, which includes a handy viewing chart

for cities along the Eastern seaboard.

Launch visibility map. The blue line indicates the rocket's projected course. The circles show where and when the vapor trails should be visible. Image courtesy of NASA / Wallops Flight Facility

Cassiopeia A and the elements lurking within it