NASA Reveals Plans for New Mars Rover, to Launch in 2020 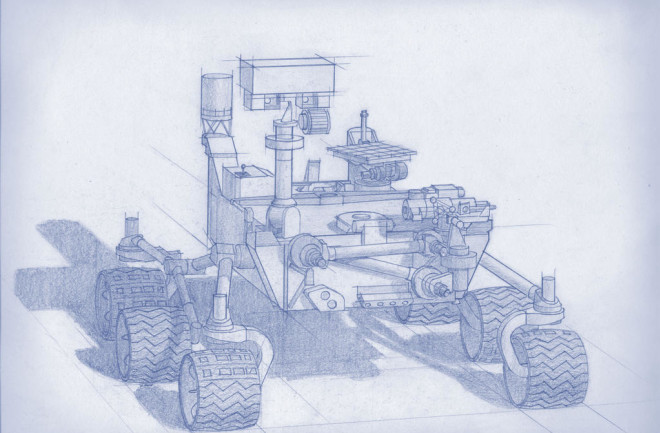 Don't be fooled. While these blueprints look a lot like the Curiosity rover now roaming the Red Planet, they actually depict NASA's new and improved version set to launch in 2020. The rover doesn't have a name yet, but NASA revealed its plans for the jacked-up version of the vehicle yesterday, and it sounds pretty darn cool.

NASA plans to rely on Curiosity's basic design for the framework of the next generation rover, but will upgrade it with a suite of fancy new scientific instruments. The team of astrobiologists, geologists and engineers planning the project are in the process of figuring out which tools to attach. While the technology will build upon the findings from previous rovers (Spirit, Opportunity and Curiosity), the new rover's instruments will offer unprecedented methods of data collection and analysis, such as zooming in on sediment samples at the microscopic level and gathering chemical and mineralogical info about their composition. Plus, instead of just grinding rocks into powder for analysis like Curiosity currently does, the proposed 2020 drill would actually extract rock cores and store them in a cache, ready to deliver back to Earth for analysis...whenever NASA figures out how to do that.

A prototype of the cache that could store sediment samples from Mars until their return trip to Earth. Image courtesy of NASA/JPL The landing technology is also looking to get an upgrade, with capabilities like range triggering---which allows the spacecraft to deploy its parachute based on distance from its target, rather than Curiosity's riskier release method which relied on velocity---and terrain-relative navigation, which lets the rover maneuver its landing autonomously by correlating real-time imaging of the ground and potential hazards with a map of the target landing zone. The 2020 rover also aims to access trickier terrain than its predecessors. Scientists hope to explore areas with geological conditions more conducive to past life than those Curiosity has found so far. The goal is to better understand the processes that have shaped the planet's history and perhaps even find signs of microbial life. In addition to seeking biosignatures, the project's other main objective is to bring NASA closer to a manned Mars mission. That means demonstrating technology that could later be used to put people on the Red Planet. The landing gear, for example, needs to be capable of delivering astronauts to the surface unharmed. And analysis of the dust and other sediments will be necessary to determine human health risks in the new environment and figure out how to make use of Mars' natural resources. T minus seven years to take-off! Get excited!