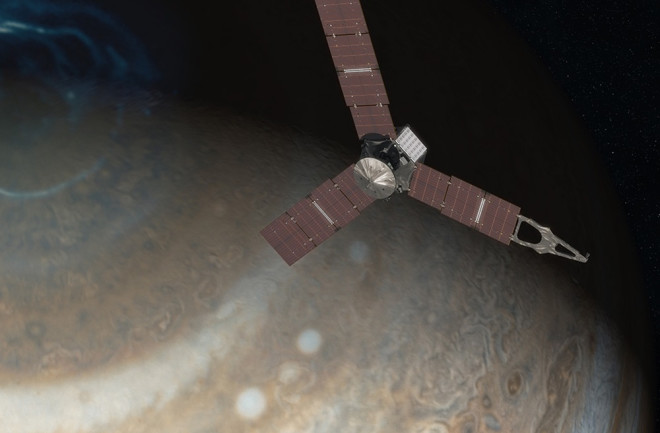 The Juno spacecraft will enter orbit around Jupiter on July 4, 2016, picking up the exploration efforts NASA's Galileo mission began 20 years ago. (Credit: NASA/JPL-Caltech) When Galileo Galilei turned his telescope to Jupiter in 1610, he uncovered the planet’s four large moons, as well as a new vision of the cosmos. Not everything had to orbit Earth. NASA’s first dedicated mission to Jupiter, named in honor of the great astronomer, was intended to bring about a similar revolution. And it mostly did. Much of what astronomers know about the gas giant and its satellites still comes from Galileo’s dataset.

But that’s poised to change July 4, 2016. NASA’s Juno spacecraft will beam breathtaking views of the gas giant and its atmosphere back to Earth. Every two weeks, the solar-powered spacecraft will plunge past Jupiter at a distance as close as 3,100 miles (5,000 kilometers) above the cloudtops. An array of scientific instruments will also help Juno peer into the heart of the largest planet in the solar system, uncovering the planet’s structure, atmosphere, and magnetosphere. Another visit to the system, the Europa Multiple Flyby Mission, is also in the works. But part of the need for such follow up missions stems from trouble with the Galileo spacecraft. Launched in 1989 after years of delay due to the Space Shuttle Challenger disaster, Galileo rewrote planetary science textbooks when it arrived December 7, 1995, but it was plagued by one severe problem. The spacecraft’s 16-foot-wide umbrella-shaped high-gain antenna was supposed to unfurl itself after traveling far enough from the sun. This would allow large images to be sent back every minute for years. Instead, the motor got stuck and the antenna never deployed. Galileo’s inadequate connection turned a data deluge into a trickle. Observations were compressed and forced through a secondary dish using a signal 10,000 times weaker. Astronomy magazine marked Galileo's arrival at Jupiter with a cover story on how the spacecraft would unlock the gas giant's mysteries. This trickle also frustrated scientists wanting to know more about one of the most tantalizing targets in the solar system — Europa. Galileo made only about a dozen close flybys of the ice moon. And during two of those, the spacecraft went into safe mode and couldn’t collect any data. So the single highest-resolution Europa image Galileo snapped has just 6 meters per pixel resolution and isn’t even in color. Still, Europa’s first photo album was startling.

Galileo imagery seemed to confirm what astronomers suspected — Europa was best explained as a spinning shell of ice atop a large liquid water ocean. The surface also gave clues to Europa’s history. Its fractured and icy terrain crawls around, breaking up and pushing together in a process akin to plate tectonics — the only known world other than Earth with such geology. Galileo’s magnetometer also detected an induced magnetic field between Jupiter and Europa. And the easiest way to interpret that is with a salty, global subsurface ocean. Ice simply isn’t conductive enough. The team only managed to gather enough data for a frustratingly low-resolution map of the moon, but the few high-resolution images were enough to whet scientists’ appetites. Earlier this year, NASA formalized plans to fill in those blank spots with the Europa Multiple Flyby Mission spacecraft that should launch sometime in the 2020s. By the time it reaches Jupiter, we should be approaching the 40th anniversary of Galileo’s launch. Clearly outer solar system exploration isn’t for the faint of heart.

This article originally appeared on Astronomy.com. Read the original article.