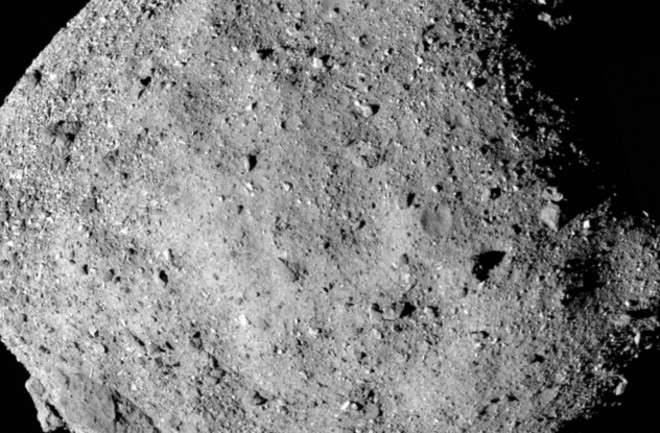 This image of asteroid Bennu is made up of 12 PolyCam images collected on Dec. 2 by the OSIRIS-REx spacecraft from 15 miles away. (Credit: NASA/Goddard/University of Arizona)

OSIRIS-REx has been busy ever since it arrived at the asteroid Bennu on December 3. The latest updates from NASA reveal that the space rock is porous, blue, and covered in massive boulders. More excitingly, they discovered evidence that Bennu's minerals interacted with water at some point in its distant past. During a press conference today at the American Geophysical Union's fall meeting, NASA's OSIRIS-REx team revealed the first results from their spacecraft's ongoing mission. The craft reached its target early this month, and is currently observing the asteroid with its instruments as scientists decide where to land. Some of the initial data from the craft indicate that Bennu's surface contains clay filled with hydrated minerals, indicating that they came in contact with liquid water at some point. The asteroid itself is too small to host any such water, but its parent body likely did at one time. While there is no sign of organics on the asteroid, the team stated at the conference that evidence of water on Bennu could support theories that suggest that asteroids contributed to the origin of life on Earth. Researchers found this evidence for these hydrated minerals using the spacecraft’s two spectrometers, the OSIRIS-REx Visible and Infrared Spectrometer (OVIRS) and the OSIRIS-REx Thermal Emission Spectrometer (OTES). “This is a great surprise,” Dr. Amy Simon, Senior Scientist for Planetary Atmospheres Research in the Solar System Exploration Division at the NASA Goddard Space Flight Center, said at the conference.

The mission team also found that asteroid looks fairly similar to what they had anticipated with a 2013 model. New imagery reveals shows the same large boulder feature on Bennu that stood out to them before, though the surface does appear to be more rugged than previously thought. [embed]https://www.youtube.com/watch?v=PAgBCmJYEWo&feature=youtu.be[/embed] With the model, the team expected the largest boulder on the asteroid to be about 33 feet (10 m) tall. But, with preliminary calculations using the OSIRIS-REx Camera Suite (OCAMS), researchers estimate this boulder to be closer to 164 feet (50 m) tall and about 180 feet (55 m) wide. The team has also found that there are far more boulders covering Bennu's surface than expected, though smoother regions exist. This is important for the craft's mission to return samples of Bennu to Earth, as its arm isn't very strong, and it'll need to land in a place where the rocks are small enough to pick up easily.

The results also reveal that the asteroid has a density just under 1,200 kg/m^3. Since the average space rock is around 3,000 kg/m^3, this makes Bennu much less dense than most asteroids. This likely means that the asteroid is porous, filled with holes and caves like a sponge. The team also found that the asteroid's surface is littered with both shiny and non-reflective rocks, something the team hopes to further examine in the future. They also confirmed Bennu's color: the asteroid is blue (ish), they say. On December 31, OSIRIS-REx will fall into orbit around the asteroid. This will make Bennu the smallest object ever orbited by a spacecraft. The craft will remain in orbit around Bennu until February 2019, when it will embark on a series of flybys to survey the asteroid. “We can’t wait to spend the next year mapping this asteroid,” said Dante Lauretta, who currently serves as the principal investigator on the OSIRIS-REx mission. “We have an amazing spacecraft with a world-class suite of instruments and a fascinating world to explore."