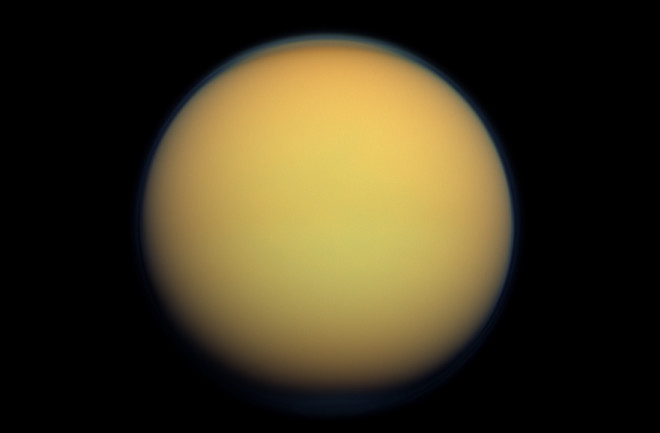 Titan seen in natural color from the Cassini spacecraft in 2012. Image Credit: NASA/JPL-Caltech/Space Science Institute When it comes to catching a whiff of extraterrestrial scents, the closest we’ve come is the Apollo astronauts’ account of our moon’s burnt gunpowder aroma. But now, NASA scientists have recreated interplanetary smells right here on Earth, starting with Saturn’s moon Titan. Using spectrometry data collected from the Cassini spacecraft, scientists mixed and matched various gases and hydrocarbons in the lab until they found a recipe that matched the unique spectral signature of Titan’s smoggy atmosphere. In the process, they classified a previously unidentified material discovered by Cassini in Titan’s brownish-orange haze. As it turns out, Titan smells a bit like gasoline.

Cassini’s Composite Infrared Spectrometer measures infrared energy from Saturn and its moons to get readings on their thermal structure and composition. Researchers therefore set out to blend the perfume of Titan by combining the gases that make up Titan’s spectral signature. They started with the two most abundant gases in Titan’s atmosphere: nitrogen and methane. Remember, methane is one of the primary gases expelled when we pass wind. However, these two gases weren’t enough to match Titan’s unique signature. They needed another magic ingredient.

Scientists then added a third gas: benzene, which is in a subfamily of hydrocarbons called aromatics. Benzene, a natural component of gasoline, is yellowish, highly flammable and has a sweet aroma. After trying out a few other options — all aromatics — scientists alighted on a nearly perfect Titan recipe. They came especially close when they added an aromatic containing nitrogen. Although Cassini had detected the presence of other gases in Titan's atmosphere, it wasn't until now that scientists were able to identify those gases as aromatics.  “This is the closest anyone has come, to our knowledge, to recreating with lab experiments this particular feature seen in the Cassini data,” lead author Joshua Sebree said in a statement. Eau de Titan, then, smells a bit like a Citgo station. Just like Michelin three-star chefs, scientists say they will continue to refine their Titan recipe until they've truly perfected it.