NASA Probe Has a Valentine's Day Date With a Comet 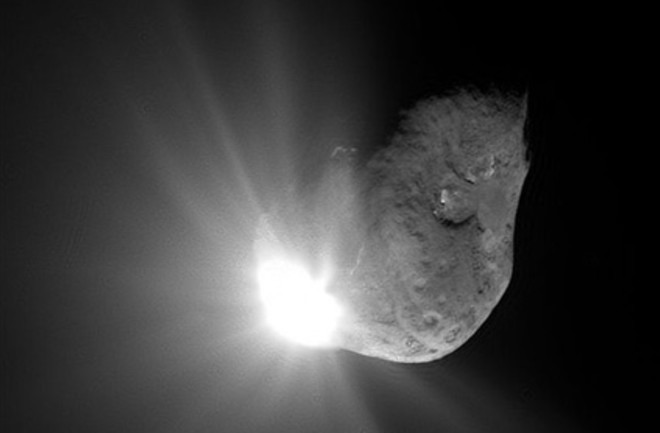 This NASA probe had its Valentine's Day plans set well in advance. On February 14 at 11:37 p.m. eastern time, the Stardust-NExT spacecraft will swoop past the comet Tempel 1 to snap photos and collect data about this solar system wanderer. The probe will pass just 124 miles from Tempel 1. Tempel 1 is of particular interest because another probe has dallied with it in the past: In 2005, NASA's Deep Impact probe approached and fired an 800-pound impactor at the comet's surface to study its composition. While that mission was a success, the dust kicked up from the crash prevented the Deep Impact probe from getting a good look at the crater created. By sending Stardust-NExT along now, researchers can finally get a good look at the crater. And that's not all they'll be looking at.

Since the 2005 impact, the comet has passed closer to the sun and then headed out to the orbit of Jupiter, before heading back for another visit to the inner solar system. The team hopes to see not only the size of the crater plowed by the 2005 impact, but also to see how a close pass by the sun resurfaces a comet. "We're going to find out a lot about how comets evolve," says Stardust-NExT co-investigator Steve Chesley. [USA Today]

The probe now known as Stardust-NExT is no newbie when it comes to cometary exploration--this will actually be its second comet. Back in 2004 the probe, then simply called Stardust

, zipped through the coma

around the comet Wild 2 and captured dust particles in a sample capsule. Stardust returned to Earth orbit and dropped the capsule into the Utah desert for retrieval, then hung around in space for a while. In 2007 NASA approved a second mission for the probe, and sent it back out to rendezvous with Tempel 1. Allan Cheuvront, Stardust-NExT program manager at Lockheed Martin, says the craft has already exceeded expectations.

"This has been a remarkable, robust spacecraft. It has done everything we've asked it to do and more." [Space.com]

But this expedition to Tempel 1 will be its last trip.

The mission team expects this flyby to write the final chapter of the spacecraft's success-filled story. The spacecraft is nearly out of fuel as it approaches 12 years of space travel, logging almost 6 billion kilometers (3.7 billion miles) since launch in 1999. This flyby and planned post-encounter imaging are expected to consume the remaining fuel. [NASA press release]

Related Content: Bad Astronomy: A Comet Creates Its Own Snowstorm!

DISCOVER: 11 Space Missions That Will Make Headlines in 2011

(photo gallery) Images: 1) The comet Tempel 1 seconds after the impactor collided with it in 2005, from NASA; 2) an artist's rendering of the probe Stardust-NExT, from NASA / JPL