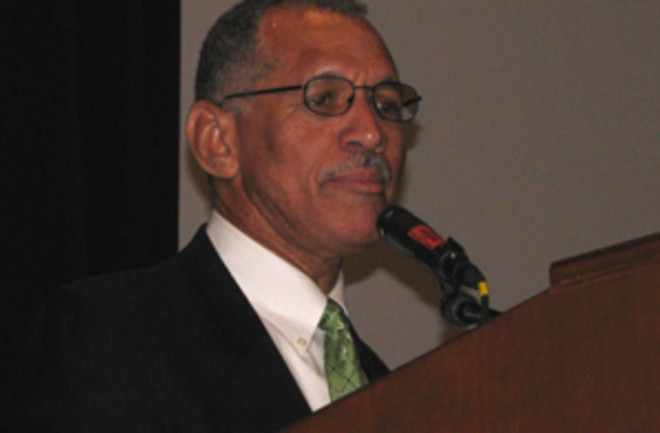 I'm at the annual winter American Astronomical Society meeting, and just left an interesting address by the new NASA Administrator Charlie Bolden. He's a former astronaut (he was on the initial Hubble Shuttle mission back in 1990) and Marine corps pilot, but now he's the top guy at NASA. It's a tradition for the NASA head to speak at the AAS meetings. I've heard talks from ex-Admins Dan Goldin, Sean O'Keefe, and Mike Griffin, and this one was very different. NASA is at a very tumultuous point in its history, with the Shuttle winding down, the future of the Constellation rocket program uncertain and under fire, and even the direction of the agency itself unclear. Because of this, and because President Obama has not made a public policy statement about these issues yet, Bolden could not give a nuts-and-bolts speech, which is understandable. For those of you who weren't following my live comments on Twitter during the talk, here are some of the highlights. He was very clear that we all need to do what we can to inspire kids about science. In a remarkable turn, he literally choked up on stage while talking about putting together a telescope with his granddaughter, and saying we need to get more kids to look through eyepieces. "Look at this!" he said, "This is what we do!" That resonates with me, of course; I've made that exact comment on this blog dozens of times.

He also said that manned space flight would not be paid off the back of science. This generated applause from the audience. However, I've heard that before, just a few years ago from Mike Griffin... and then saw science missions' funding cut back to pay for the lunar exploration program. So while I agree with Bolden's sentiment, I don't know if he can pull that particular feat off. I sure hope he can. When asked about the issues with delays in the Shuttle replacement, he stated that "This President won't be the one who presides over the demise of the manned space program." (quoting from my memory of what he said). He also stated how strongly Obama supports science; something we already know but it's damn good to hear it again. He also said, "If you had told me 20 years ago that we wouldn't be back on the Moon by now, I'd have said you were smoking dope." That was great to hear! I know a lot of us outside of NASA have been saying that for years, but it was refreshing and wonderful to hear the head of NASA saying it, and saying it so frankly. He even repeated the statement to make sure we got it. Very cool indeed. Overall, Bolden reinforced how committed NASA is to science -- something that needs to be said when addressing 1000+ astronomers, who traditionally and by large majority tend to support unmanned robotic exploration over the much more expensive and usually less-scientifically oriented manned flight. He stressed that we all need to be teachers, and we all need to be the inspiration for the next generation. I agree in general, and certainly in specifics about inspiration. So this first date with the NASA chief went as a lot of first dates go. Hopeful, with some reservations on promises made based on the delivery of further evidence, but... hopeful.

[During the talk I sat next to my dear friend and woman-full-of-awesome Pamela Gay, who has posted her thoughts on this as well.]