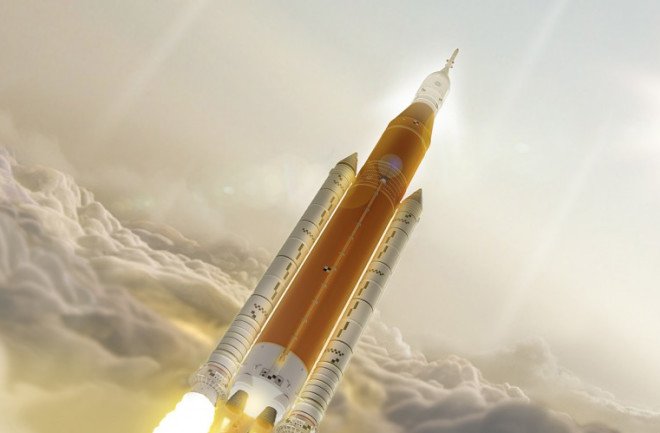 NASA's Space Launch System (SLS) would propel astronauts and cargo into deep space, but its power is limited with only its base components in the budget. (Credit: NASA) NASA Administrator Jim Bridenstine was at Kennedy Space Center in Florida on Monday to talk about the proposed NASA budget for 2020. While Bridenstine referred to the Trump administration's proposed NASA budget as “strong,” and emphasized that funding for spaceflight exploration is high, the budget proposal also strikes funding from some missions. And, in total, it allocates $500 million less than what Congress appropriated for NASA last year. Congress, not the executive branch, holds the power to set funding levels. The White House's annual budget is a more of a policy statement about an administration's desired approach. And with NASA budgets, Congress's final funding levels often don't reflect an administration's proposals.

This year's proposal highlights NASA’s “Moon to Mars” program, providing funding for science missions on the lunar surface and for the Lunar Gateway, the planned space station that would orbit the moon and provide access to the moon’s surface. NASA also says it could one day support future missions to Mars. The space agency's proposed budget would continue funding the Space Launch System (SLS) and Orion, NASA's upcoming enormous rocket and crew capsule. Those plans cover NASA’s homegrown missions for crewed spaceflight and future large payloads. However, the proposal does delay funding for what the agency calls "SLS Block 1b," a previously planned upgrade that would be used to launch parts of the Lunar Gateway. Without Block 1b, NASA will have to rely on commercial access to deep space for large payloads, at least for the next half a decade or so. That means it might be SpaceX or one of its competitors instead of NASA who actually delivers the Gateway's first pieces to orbit. In planetary science, the Europa Clipper and Mars 2020 missions will proceed, and there is additional money for a Mars Sample Return mission for the mid-2020s. One of the Mars 2020 rover's goals is to gather samples of rock and soil that a so-far unspecified mission might return to Earth for study -- the first time for a Mars mission. If funded, this sample return mission would set those plans more sturdily in place. But the proposed budget would also cut funding for the much anticipated WFIRST observatory, which was meant to study dark energy, exoplanets, and the infrared sky. The space telescope would complement the long-delayed James Webb Space Telescope, which is funded for a 2021 launch. Like the Hubble Space Telescope, JWST will have a small field of view for observing a smaller number objects but in high detail. WFIRST would have a field of view 100 times that of Hubble, allowing for more survey-style work. WFIRST was also cut in the 2019 proposal, but Congress funded it anyway. Similarly, the 2020 proposal, if accepted, would cut funding for science education by NASA, as well as two Earth science missions, called PACE and CLARREO Pathfinder, as it did in 2019. The PACE mission would study how carbon dioxide moves between the ocean and atmosphere, while CLARREO Pathfinder is a technology demonstration to a full CLARREO climate change observation mission. Congress restored funding last year for such missions, but it remains to be seen whether they will repeat their funding decisions this year.