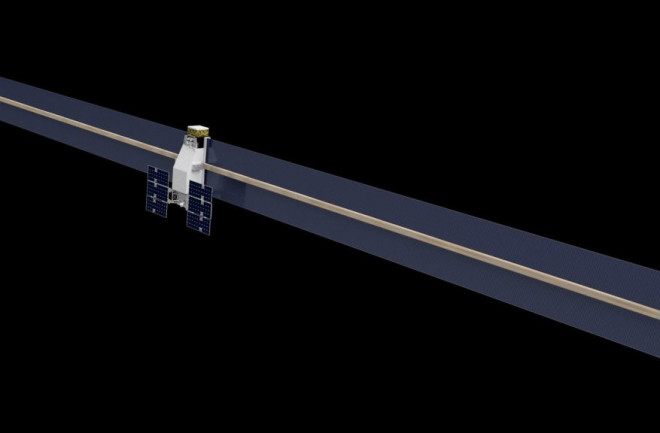 Archinaut One will test 3-D printing spacecraft components, and then assembling them, in low-Earth orbit. (Credit: Made in Space, Inc.)

Putting a satellite in space is news of the past, but launching a spacecraft that can 3-D print and self-assemble is a story of the future. NASA is now betting on the technology being ready for prime time as early as 2022.

Last week, the space agency announced that they had awarded a $73.7 million contract to a startup company called Made In Space, Inc. The money will fund a test of the concept using a small spacecraft, called Archinaut One, in low-Earth orbit.

Made In Space is a California-based startup that specializes in developing manufacturing tech to be used in space — a task easier said than done.

Space isn’t the friendliest of environments for building things (or doing anything, for that matter). For starters, the average temperature in outer space is -457.87 degrees Fahrenheit (-270.15 degrees Celcius), and there is little gravity or pressure.

But back in 2014, Made In Space made history by 3-D printing the first object ever produced in space. And since 2016, they have been running a permanent manufacturing unit inside the International Space Station, dubbed the Additive Manufacturing Facility (AMF). Since its installation, this on-demand hardware store has built over 200 tools, devices and components via 3-D printing.

Just like astronauts can survive the harsh conditions of space thanks to their protective suits, the AMF still functions in space because its parts are encased, letting it print like it would on Earth. AMF can print using a variety of materials, including an aerospace-grade polymer commonly found in spacecraft and rocket parts. And earlier this year, the company also saw its Refabricator installed on ISS, which can use recycled plastic to 3-D print new parts.

Now the goal is to build large spacecraft parts. That will require leaving the confines — and protection — of the ISS and moving their 3-D printing operation into the vacuum of space. The undertaking will require the machine to print parts larger than itself and then assemble them. Made In Space claims to have developed a system capable of integrating 3-D printing and robotics to do just that.

The plan is for Archinaut One to travel to low-Earth orbit and then print two telephone pole-sized beams on each side of the spacecraft. As the beams extend out, solar arrays will unfold on their tops that can generate 5 times more power than traditional solar panels on spacecraft of similar size.

If successful, the technology will be a game-changer for space exploration. One of the most significant limitations of space travel is how much stuff you can bring aboard your spacecraft. That’s not a problem if you can just build things you need once you need them. Space 3-D printing would let companies and governments construct complex structures in orbit and reduce the need for astronauts to do spacewalks for repairs.

“By taking the lead in the development of this transformative technology, the United States will maintain its leadership in space exploration as we push forward with astronauts to the moon and then on to Mars,” said Jim Reuter, associate administrator of NASA’s Space Technology Mission Directorate, in a press release.

“This technology will help humans go back to the moon and on to Mars by lowering the cost of delivering capabilities in [low-Earth orbit] and beyond,” said Andrew Rush, president & CEO of Made In Space, in a tweet. He added: “I am excited to see the team take on this challenge and realize the opportunities of Archinaut in-space manufacturing and assembly technology.”