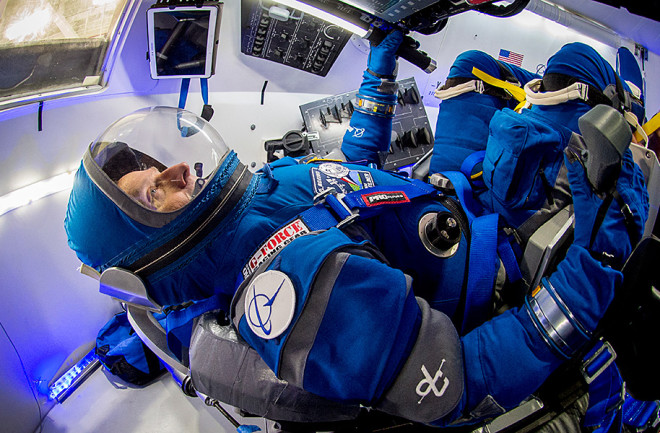 Astronaut Chris Ferguson looks like a man on a mission in the new suit. (Credit: Boeing) NASA’s astronauts will be looking a little blue in the near future—because of their striking new attire. Boeing has introduced a line of sleeker, smarter and perhaps most-noticeably, bluer spacewear. The suits, nick-named the “Boeing Blues,” were designed specifically for those currently being trained for flight in Boeing’s Starliner and SpaceX Dragon capsules – which in addition to having awesome names, will serve as taxi shuttles for those traveling to and from the International Space Station (ISS). Custom-tailored for each astronaut, the suits are roughly 10 pounds lighter than their bulky orange predecessors, and come equipped with some top-notch features including thinner, more-flexible helmets and gloves that are touch-screen compatible.

(Credit: Boeing) “The most important part is that the suit will keep you alive,” astronaut Eric Boe said in a news release. “It is a lot lighter, more form-fitting and it’s simpler, which is always a good thing. Complicated systems have more ways they can break, so simple is better on something like this.”

(Credit: Boeing) Though they weren’t designed for activity outside of the shuttles, (sorry folks, no spacewalking in these bad boys just yet) each suit has an automatic pressurization system built-in for emergency situations. Richard Watson, a subsystem manager in NASA’s Commercial Crew Program emphasized that these features were added as “emergency backups” to the many life-support systems incorporated into the shuttles themselves. NASA officials estimate that the Starliner and SpaceX services will launch sometime within the next two years.