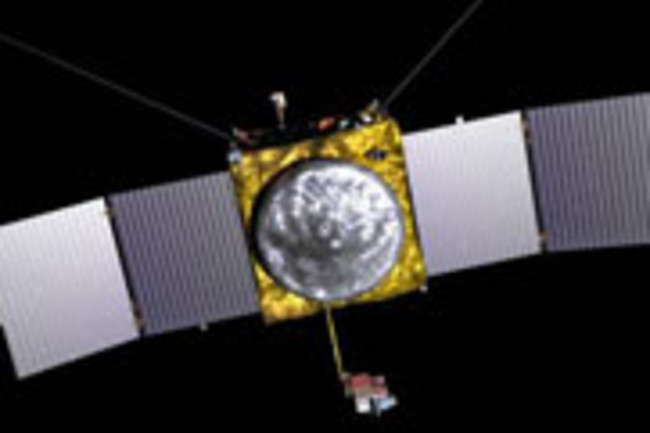 NASA has announced that in 2014 a new spacecraft called MAVEN will settle into orbit around Mars, and will get to work trying to solve the mystery inherent in the thin atmosphere of the Red Planet.

Mars once had a much denser atmosphere which allowed liquid water to swill across its surface, but much of the former went awol "as part of a dramatic climate change." Doug McCuistion, director of the Mars Exploration Program, said: "The loss of Mars' atmosphere has been an ongoing mystery. MAVEN will help us solve it" [The Register].

The $485 million mission will be led by a team from the University of Colorado. MAVEN (which stands for

Scientists are eager to study why Mars is such a dry and barren planet today, when geological evidence shows that it had a dense atmosphere billions of years ago that allowed for liquid water on its surface.

will be the second mission of the space agency's Mars Scout program, a recent push by the agency for smaller, lower-cost spacecraft. The first, the Phoenix, was launched in 2007 and is operating on the surface of Mars [Denver Post].

Many planetary scientists believe the disappearance of Mars' ancient magnetic field has been a significant factor in this. Maven will study current atmospheric "leakage", looking closely at the role played by the charged particles streaming away from the Sun. Without the deflecting presence of a strong magnetic field, this "solar wind" will collide with atmospheric gases and slowly erode them into space [BBC News].

The planning process for the atmospheric mission has suffered through delays; NASA announced last December that a conflict of interest on the committee responsible for picking the winning team forced the agency to disband the committee and start over. That snag slowed down the entire project.

The Mars Scout program had originally been scheduled for 2011 launch. But since Mars only comes close enough to Earth to launch probes every 26 months, NASA had to postpone the mission to 2013 [AP].

The science mission will also be shortened, from two years to one, because the probe will reach Mars later in the planet's solar cycle, and after one year in orbit conditions will be less favorable for study. Read about one scientist's strange proposal to restore Mars' dense atmosphere in the DISCOVER article, "How to Revive an Old, Cold Planet." Image: NASA