The day has dawned, the clock has rung, the time has come, calloo callay! Tonight, the Mythbusters take on the Moon Hoax (check your local listings)! OK, for you newbies, read Parts 1 - 4 (here, here, here, and here). That'll catch you up on the history. I was able to get an advance copy of the show -- I have powers beyond those of mortal men... or maybe I'm just on a Discovery Channel mailing list for the show, and I asked for a DVD when they said they'd send them to journalists -- and let me say, it's really good. One of their best, in fact! I can't reveal the results of their tests, but I will say that however each of the tests did in fact turn out, I could see why they came to the conclusion of "busted, confirmed, or plausible" for each. Having helped them with some of the tests, it was very cool to see the results on screen. They tackle several of the biggies, including why shadows on the Moon appear to be non-parallel. To my great surprise, they came to a somewhat different conclusion than I usually claim for this. I will have to amend my own discussion of this when I give my Moon Hoax talk. Seriously. Nice work on the MB team's part! Oddly, one thing that stood out for me was the pronunciation on the show of the word "regolith" (the powdery surface dust on the Moon). I have always said rehg-o-lith, but they all said reeg-o-lith. Now, they talked to NASA folks who must know how to pronounce the word, so you'd think that was right. The thing is, I've talked to experts as well, and the ones I know say it the way I do! So now I'll have to dig into this (haha! Dig! It's regolith!) a little deeper. Interesting. 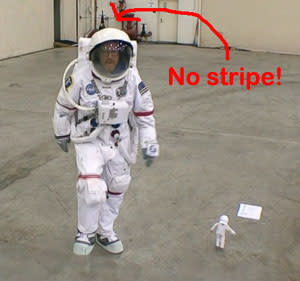 One big laugh was that Adam has his own space suit. It was a wedding gift from the MB team. He then modded it to make it more accurate, including a wrist-mounted booklet of instructions just like the Moonwalkers had. But in one part, I noticed that while he put red commander's stripes on the arms and legs, he left the stripe off the helmet. I was gonna take him to task on this, and then found out that the helmet stripe was only added after Apollo 13. Knowing Adam as a close personal friend*, I'm sure he modded the suit to be an Apollo 11 one.

The funny thing to me is that Neil Armstrong was the commander of Apollo 11, and took all the pictures of the lunar surface during their short stay in Apollo 11, so all the shots show Buzz Aldrin, the astronaut without the stripes.

Edited to add: As has been pointed out in the comments below and personally to me via email, the stripes weren't added at all until Apollo 13, so in fact Adam's suit is incorrect if he's trying to make it an Apollo 11 simulacrum. I will very much tease him about this when I get the chance.

OK, so it's not all love and roses for the MB guys: I do have one minor complaint, and it's about their test of the flag-waving in a vacuum. They seemed to focus on the flag continuing to move after an astronaut stops manipulating the flagpole into the lunar surface, whereas the Hoax goofballs always seem to be complaining that the flag is moving at all, even when the astronaut still had his hands on the flagpole. When I show clips of the flag waving, I make a big point that the corner appears to flap up very high on the Moon, and that's due to no air and lower gravity. On the Earth, air resistance makes the flag flap rather lackadaisically, and that shows the astronauts were in a low-gravity vacuum environment. Hmmm, where would the nearest low gravity vacuum be? Oh, I know: the frakkin' MOON. The MB team also tackle the idea that NASA may have slowed down the footage of the men on the Moon to make it look like they were in lower gravity. Basically, as has been argued by me as well as my friend Jay Windley, slowing down the footage makes it look like the gravity acting on them is less, but it won't make non-gravitational motions look right. So if an astronaut picks up a rock and drops it, the rock will fall slower, but the actions of the astronaut moving his arm is slowed as well, and that looks goofy. The Mythbusters did a fine job going through this argument and their experiment was not only well executed but Jamie made an excellent observation during that part. I won't reveal what they found, but keep your ears open for his comment there. I have some more notes, but I can't really discuss them without giving away the results, so I'll hold off. But I think that's probably enough. You should see for yourself. If I have any real complaints about this episode, it's that is was too packed with stuff. They should have made it a two-parter! For example, I would have loved loved loved to see how Adam made the model of the Lunar Module (over which I still lust). And there were other aspects that would have been cooler if more details had been given. But still and all, enough is there to cover the ground regolith on this hoary and hairy myth. For those who want more, Robert Pearlman at CollectSPACE did an interview with the MB team which is now up, and there are some tidbits from me as well. And I must leave you with this: a screen capture of the title credits for the show: 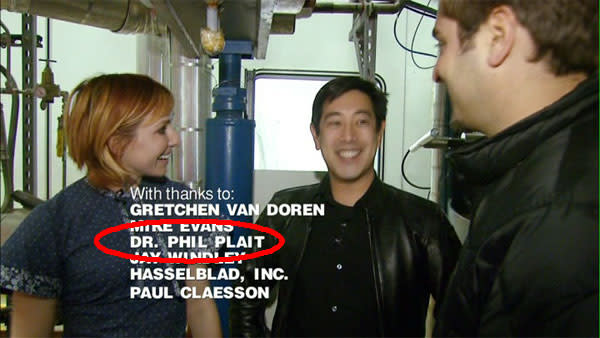 Squa-weeeee! ^*I am contractually obligated to refer to him this way.